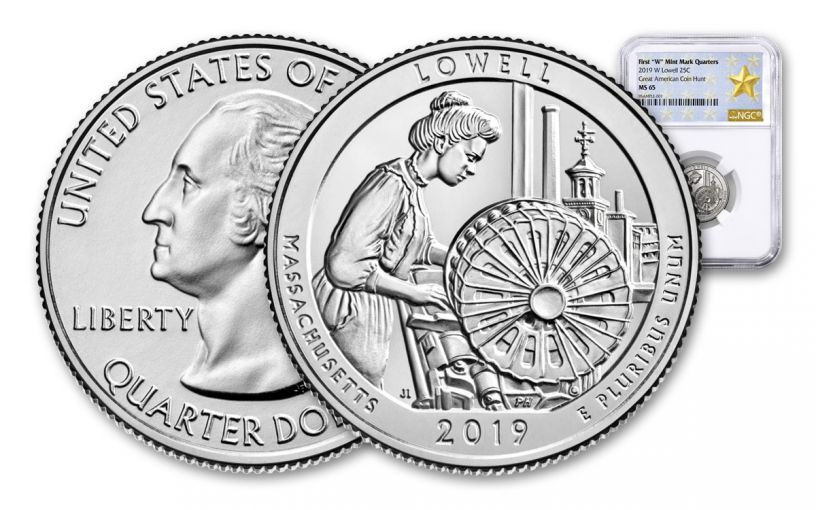 Availability: In Stock
This item will ship within 2 business days.
Item #
350871
Add to Wish List Add to Wish List Wishlist is for registered customers. Please login or create an account to continue. Add to Compare
Recommended Products
Product Description

We’ve managed to rescue a small hoard of 2019’s first ATB coin, the 2019 Massachusetts Lowell National Historic Park Quarter meant for circulation and had them certified and graded by the Numismatic Guaranty Corporation (NGC), one of the world’s leading third-party grading services! And here’s the good news: Each coin available in this offer has been graded by NGC as being in stunning Gem Uncirculated Mint State-65 (MS65) condition! Plus, each will also come encapsulated in an acrylic holder with an exclusive West Point Gold Star label.

Why the special Gold Star label? It’s because the Lowell National Historic Park Quarter represents the FIRST TIME the famous “W” mint mark of the West Point Mint has ever appeared on a quarter! The U.S. Mint released these special “W” quarters only into the general circulation of banks across the United States, so tracking down coins that can achieve high Mint State grades will be quite difficult. Just think about how many of these coins will be unceremoniously dumped into change jars and piggy banks without so much as a glance to see if they have the mint mark – it’s a true circulating rarity from the U.S. Mint and an amazing “First” that you’ll want to add to your personal collection!