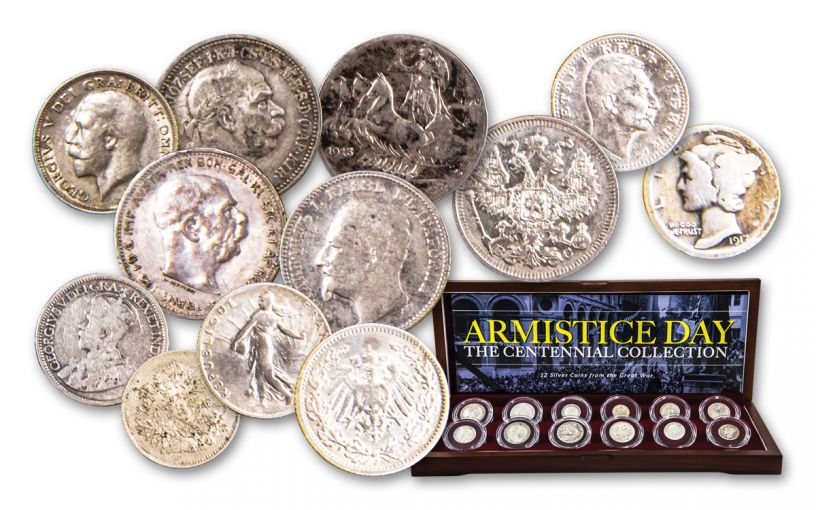 Availability: In Stock
This item will ship within 2 business days.
Item #
337656
CC Payments as low as
$89.50 / month
Add to Wish List Add to Wish List Wishlist is for registered customers. Please login or create an account to continue. Add to Compare

On November 11, 1918, the Armistice was signed and World War I officially ended. Now, 100 years after the war’s end, we’ve assembled an historic collection that brings together coins from 12 different countries involved in the conflict. It’ a set unlike any other, and one you will be proud to display both now on the 100th anniversary of the end of the “War to End All Wars,” and for years to come as a way to remember the brave souls who sacrificed so much in the brutal conflict.

Each coin in your set -- including some from countries and empires that no longer exist – was in circulation on Armistice Day! The coins included are:

With nearly 40 million casualties – of which about 17 million died – World War I was one of the deadliest conflicts in human history. When it was over the empire of Austria-Hungary was dissolved and Austria, Hungary, Czechoslovakia and Yugoslavia were created from its land. The Ottoman Empire gave up territories in Southwest Asia and the Middle East leaving a small portion of its empire that was renamed Turkey. The Russian empire collapsed and became the Soviet Union after losing land that ultimately became Finland, Estonia, Latvia and Lithuania. The German empire also fell, leaving it to be governed instead by the Weimar Republic for a little more than a decade before Hitler’s Nazi party grabbed a chokehold on the nation. Finally, Poland was reconstituted from lands held by Germany, Russia and Austria-Hungary. The blood-soaked continent would get only a short respite, however, before the seeds planted in the First World War were sowed just two decades later in the unspeakable horrors of World War II.

Often overshadowed by Second World War,  interest in the World War I is becoming increasingly keen as the 100th anniversary of its end is observed. If you or someone you know is interested in history, this is the perfect time to obtain genuine artifacts of World War I. Secure this beautiful and historic set now!