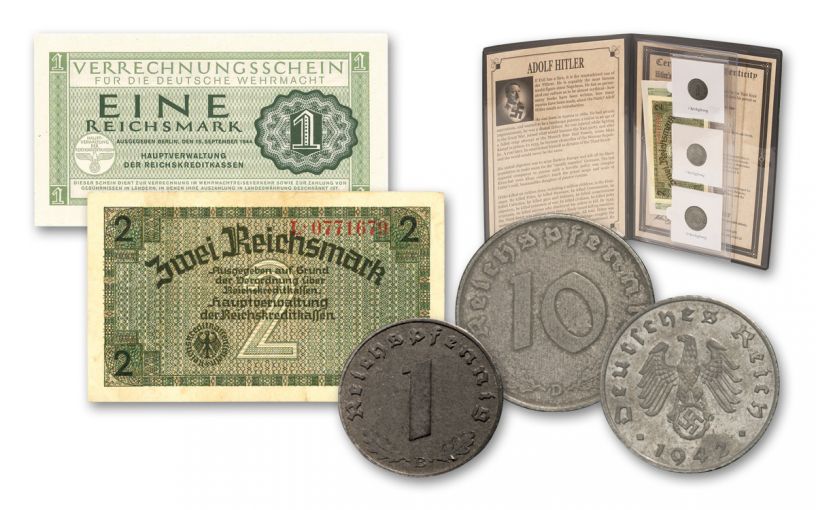 Availability: In Stock
This item will ship within 2 business days.
Item #
333507
Add to Wish List Add to Wish List Wishlist is for registered customers. Please login or create an account to continue. Add to Compare

As Adolf Hitler’s Nazi Germany spread its tentacles across Europe, his conquering Stormtroopers carried with them special bank notes that they could exchange for cash. And the local bankers and merchants accepted it – or else!

Issued with the Nazi party’s infamous swastika insignia, this currency circulated throughout Germany, or was carried by German soldiers. Each was its own little propaganda piece serving as a reminder of who was in charge – although, remarkably, Hitler himself never appeared on German money!

This five-piece set includes three coins and two banknotes. The coins include the 1, 5 and 10 Reichspfennig zinc coins each featuring the Nazi eagle and swastika on the obverse. The banknotes are 1 and 20 Reichsmark notes – certificates that soldiers exchanged for currency in occupied nations.

German currency from World War II is highly coveted by coin collectors and history buff alike. Because Nazi Germany and everything associated with it was so despised following World War II, many coin and currency pieces were destroyed, thus making them scarce and hard to find today.  Each piece in this collection is an authentic artifact from the Second World War and the set comes housed in a presentation folder with a deluxe information card. It’s perfect for coin and history buffs of all ages!