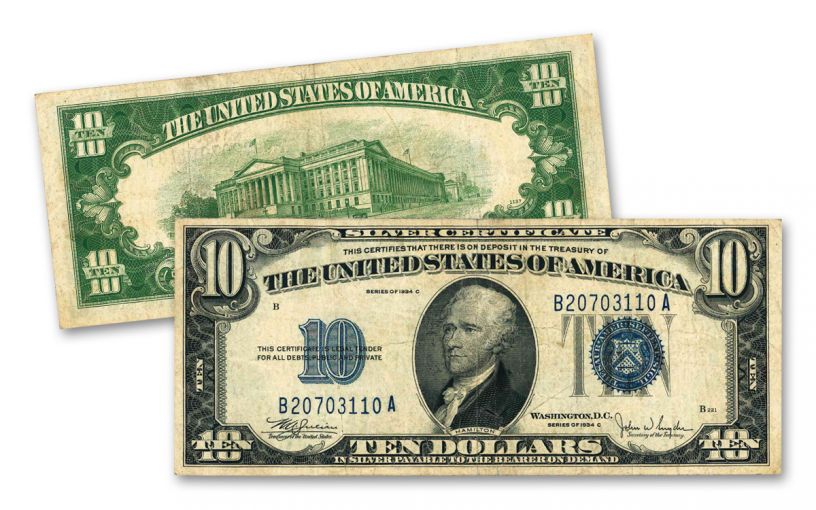 Availability: In Stock
This item will ship within 2 business days.
Item #
354938
Add to Wish List Add to Wish List Wishlist is for registered customers. Please login or create an account to continue. Add to Compare

One of the Largest Silver Certificates of the Great Depression

During the depths of the Great Depression in the 1930s, ten dollars was equivalent to a small fortune. So, when this $10 Silver certificate was issued as part of the Series of 1934 Silver Certificates it represented the highest value note issued in the new, smaller 6" x 2.5" size. It was also redeemable for its face value in silver bullion or Silver Dollars in the United States Treasury, meaning you could turn it in for ten brand-new shiny Peace Silver Dollars at your local bank.

In fact, you could exchange this note for its face value in silver up until 1968. They were still – and remain – legal tender, but nowadays you won’t get silver in return. Whenever these beautiful notes were exchanged, however, most were quickly destroyed by the government, meaning very few exist today in any condition.

Featuring a stark blue seal and blue serial numbers as opposed to the green Treasury seals and serial numbers of today’s Federal Reserve Notes, the front of this note displays the classic portrait of Alexander Hamilton as painted by John Trumbull in 1805. The back of the note shows the U.S. Treasury building with a vintage 1930s-era automobile driving past on the street. The note also comes in nice Very Fine (VF) condition exhibiting only moderate signs of circulation. It’s truly a great-looking note at a great price!

Just think of the history this note has witnessed since it was printed more than 85 years ago. Franklin D. Roosevelt was President of the United States, Harlem’s Apollo Theater has just opened in New York City, and Depression-era bank robbers John Dillinger and Bonnie & Clyde were robbing and murdering their way into the history books. And this $10 Silver Certificate was there to see it all!

Add this fantastic piece of authentic American history to your collection and share it with your friends and family. It will be a cherished keepsake both now and for many years to come!