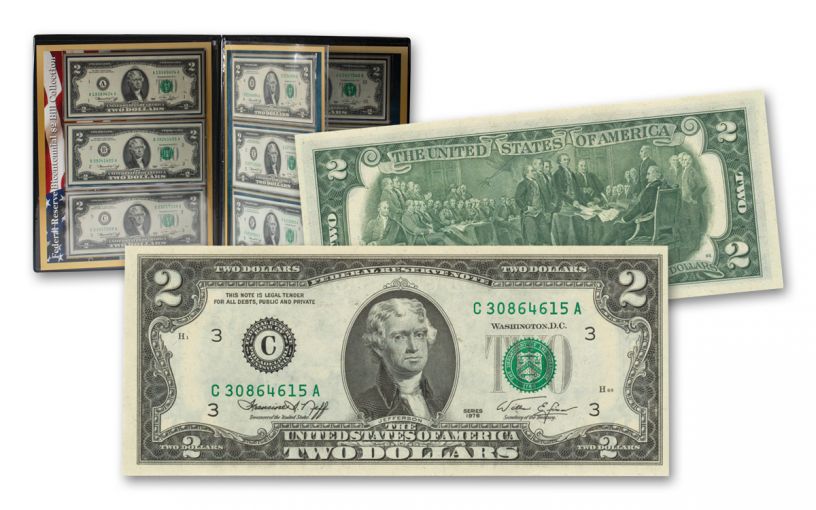 Availability: Out of Stock
This item is currently Out of Stock. Please sign up to be notified if this product becomes available.
Item #
353347
Add to Wish List Add to Wish List Wishlist is for registered customers. Please login or create an account to continue. Add to Compare

Each year, the Bureau of Engraving and Printing prints billions of dollars in the form of Federal Reserve Notes for delivery to the Federal Reserve System. There are 12 Federal Reserve Districts, and this complete collection brings together a 1976 Bicentennial $2 Bill from each district; Boston, New York, Philadelphia, Cleveland, Richmond, Atlanta, Chicago, St. Louis, Minneapolis, Kansas City, Dallas and San Francisco.

Since notes are distributed regionally, acquiring a complete set of all 12 districts can be nearly impossible. But we’ve used our network of agents and done the work for you, and now you can secure this whole collection in its entirety – with each note coming in Crisp Uncirculated condition, and the entire set comes beautifully housed in a custom display folder!

This set is a chance for you to take a trip down memory lane and revisit the days surrounding the 200th anniversary of the signing of the Declaration of Independence. It was the same year Freddie Mercury and Queen unleashed Bohemian Rhapsody and Dancing Queen was ABBA’s latest addition to the Disco craze. Happy Days and M*A*S*H were the top shows on television and Sylvester Stallone introduced the cinematic world to the iconic pugilist named Rocky Balboa. Jimmy Carter was elected President and the Cincinnati Reds beat the New York Yankees in Major League Baseball’s World Series.

America’s 250th Sestercentennial Anniversary is just around the corner. Get a head start and add this wonderful set to your collection today!