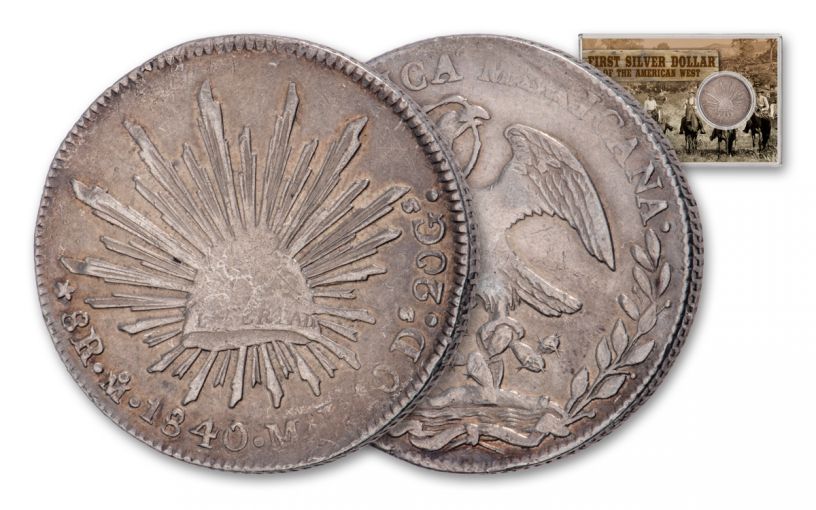 Availability: Out of Stock
This item is currently Out of Stock. Please sign up to be notified if this product becomes available.
Item #
344401
Add to Wish List Add to Wish List Wishlist is for registered customers. Please login or create an account to continue. Add to Compare

The First Silver Dollar of the American West

The sodbusters, saloon keepers, cowboys and gunslingers of America’s West developed a culture based on individualism, self-reliance and even violence at the end of a smoking gun. As civilization slowly took hold, money was sure to follow. But with no circulating dollar coin readily available from the U.S. government – the U.S. Mint didn’t strike any silver dollars from 1803 until 1840 – the coin most often plunked down on bars and store counters across the West were these Mexican Cap & Ray 8 Reales coins.

Accepted as official legal tender in the United States until 1857 – and readily accepted in commerce throughout the West well into the 1870s – they were struck in 90.3% fine silver and were about the same size and weight as the Morgan Silver Dollar that would not be struck until 1878. Whether they were jingling in saddle bags, coin purses or cash boxes, the Mexican Cap & Ray was the First Silver Dollar of the American West. We managed to locate a number of these vintage Cap & Ray 8 Reales coins struck at La Casa de Moneda de México (the Mexican Mint) between 1837 and 1869. Each comes in Fine to Very Fine (F-VF) condition and beautifully housed in a custom acrylic display holder with an informative storycard. Date and condition will vary.