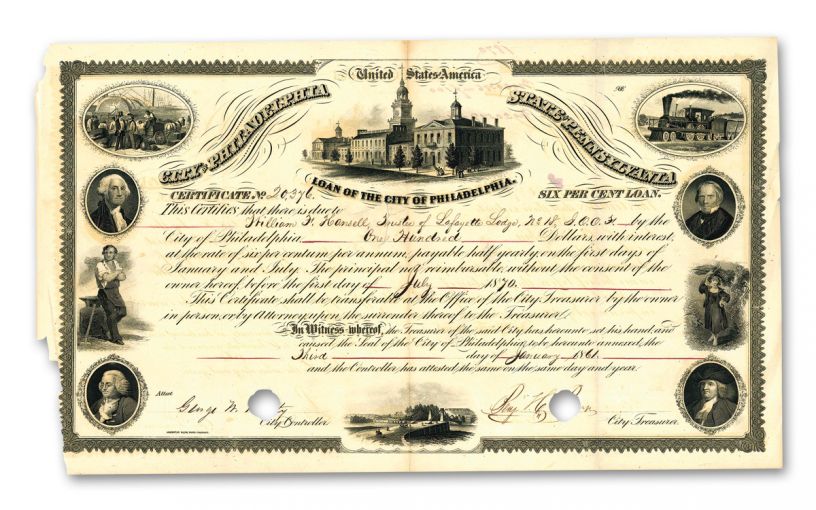 Availability: In Stock
This item will ship within 2 business days.
Item #
345346
Review this product
Add to Wish List Add to Wish List Wishlist is for registered customers. Please login or create an account to continue. Add to Compare
Complete your collection with one of these:
Product Description

After the American Revolution, the city of Philadelphia was chosen to be the temporary capital of the United States. While the federal and state governments had left the city by the beginning of the 19th century, Philadelphia remained the cultural and financial center of the country as well as being one of the nation’s first industrial centers. It reached the pinnacle of its economic power by the middle of the 1800s and was so financially secure that the city even made loans to its citizens just as a bank would.

Now you can own a piece of the “City of Brotherly Love” with one of these paper bonds issued by the City of Philadelphia more than 140 years ago! Larger than a standard sheet of paper, this attractive City of Philadelphia paper bond would have been given as a title for a loan. Printed between the 1850s and 1870s, it displays 10 different historical vignettes, including Independence Hall, George Washington and Benjamin Franklin. Ready for framing, it’s a gorgeous piece of U.S. history that would look perfect on the wall of your study.

Whether you’re new to the field of Scripophily – a specialized field of numismatics related to the study and collection of historical documents like stock and bond certificates – or someone who just likes owning unique pieces of history, this vintage 19th Century City of Philadelphia Paper Bond is just the ticket!

Click one of these authentic documents to your cart today and capture a moment in United States history from the city known as the Cradle of Liberty for its vital role in the America Revolution! Order yours now!