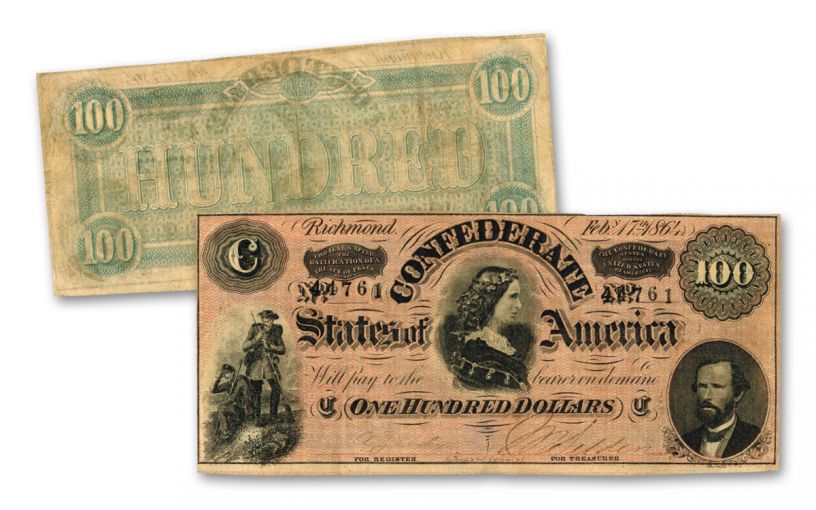 Availability: In Stock
This item will ship within 2 business days.
Item #
334483
CC Payments as low as
$99.50 / month
Add to Wish List Add to Wish List Wishlist is for registered customers. Please login or create an account to continue. Add to Compare

She Was The Perfect Southern Belle-And They Put Her on a Banknote For It!

Lucy Pickens was one of the most beautiful and brilliant women of the old South – the epitome of a Southern Belle. Celebrated as the "Queen of the Confederacy," she was the only woman ever to be pictured on Confederate currency. She reportedly sold her jewels to help outfit the Confederate Army unit that bore her name, the Lucy Pickens Legion. Now, you can acquire an authentic 1864 Series $100 Confederate note featuring the famous portrait of this memorable Southern beauty. The large note measures a 7-1/2” x 3-1/2” and comes graded in beautiful Fine condition.

Besides this note, Lucy Pickens also appeared on the Confederate $1 note making her one of the most recognizable women of the Civil War. She was married to Francis Wilkinson Pickens, the governor of South Carolina. Governor Pickens took office shortly before that state was the first to secede from the Union. He sanctioned the firing on Fort Sumter in Charleston Harbor in 1861 – an event that Lucy Pickens was said to have watched from a rooftop with a gaggle of other Southern socialites.

All Hail the Queen! Get your 1864 Confederate Lucy Pickens $100 Note featuring the only woman pictured on Confederate currency. Add this historic piece of American history to your cart today!