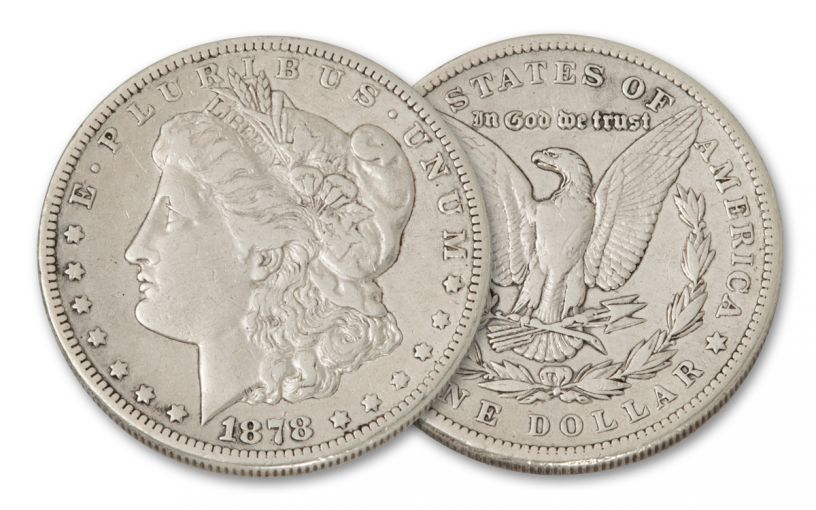 Availability: In Stock
This item will ship within 2 business days.
Item #
411644
Add to Wish List Add to Wish List Wishlist is for registered customers. Please login or create an account to continue. Add to Compare
Recommended Products
Product Description

That’s what critics likely shouted at U.S. Mint officials after the 1878-P Morgan Silver Dollar was first released. Of course, the Morgan went on to become perhaps the most widely collected vintage silver dollar ever struck in American history, but eagle-eyed collectors noted that the Bald Eagle depicted on the reverse sported eight tail feathers — even though this particular eagle should only have seven!

The Mint would try to rectify the problem not once, but twice resulting in not one, not two, but THREE unique collector variations! That makes this one of three varieties of first-year Morgans struck at the Philadelphia Mint! No Morgan collection is complete without it, so secure yours now in nice Fine to Very Fine (F–VF) condition.

This coin represents the Mint’s third attempt at striking the coin. It’s the famous 7 Tail Feathers variety. The third try was the charm and the 7 Tail Feathers variety finally got it right — the last of three reverse tail feather varieties struck during the coin’s first year. Now with an anatomically correct eagle, the design would be used throughout the rest of the series’ 28-year run.

With only limited quantities available, this fine-feathered offering will not last for long. Click this beautiful key-date 1878-P Morgan Silver Dollar 7-Tail Feathers coin to your cart today!