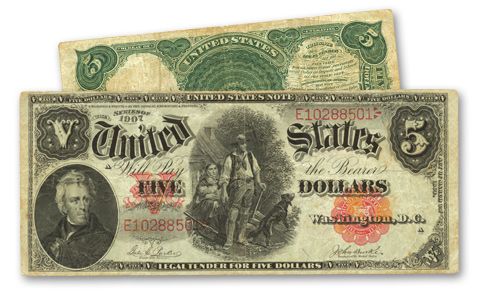 When this $5 legal-tender note was issued in 1907, the memory of the American pioneer building a log cabin with just his ax and elbow grease was still vivid in the collective consciousness. It’s no wonder this design paying tribute to that pioneer spirit was chosen to be on this note, which quickly was labeled "the Woodchopper."

The intricately engraved vignette of a frontiersman and his family is the central feature of the note, which also shows an engraving of President Andrew Jackson. A bold red "V," the treasury seal and the serial number all combine to make this note a real work of art. The reverse features an ornate decorative pattern in green. It's also the last $5 "Horse Blanket" note, so named because of its large size – at 7.375” x 3.125” it is 40% larger than today’s notes so don’t even think about trying to cram it into your wallet!

Over the years, collectors have made this note one of the most popular currency issues of all time. Despite being more than 110 years old, this captivating note can still be yours in beautiful Fine condition, housed in a protective acrylic holder for optimal viewing. Hurry, as you can imagine, our supply is extremely limited.

Discover the spirit of America for yourself and add this note to your cart today!