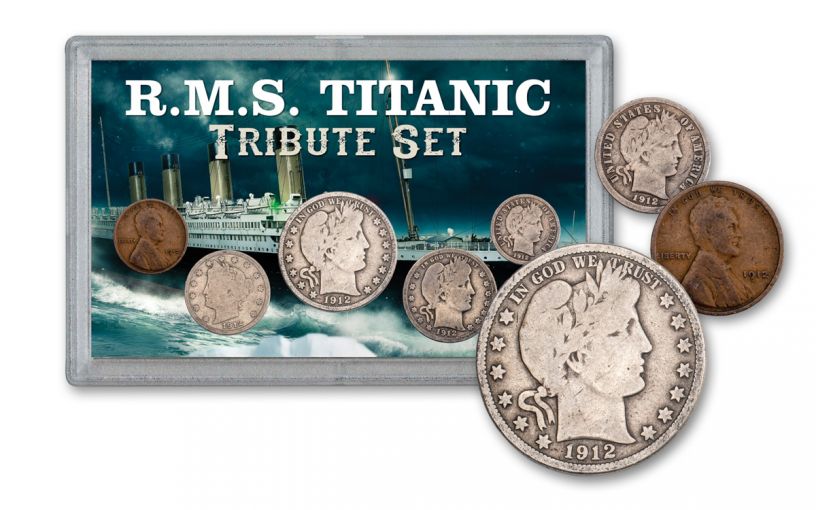 Availability: In Stock
This item will ship within 2 business days.
Item #
343114
Add to Wish List Add to Wish List Wishlist is for registered customers. Please login or create an account to continue. Add to Compare

In 1912, the unthinkable happened. That was the year a not-so-small ship named the RMS Titanic set out on its first and only voyage, carrying 2,227 enthusiastic passengers and crew. Of course, as the history books and Hollywood have shown, the massive steamship did not complete her historic trip from Southampton, England to New York City. On the evening of April 14, the "unsinkable" ocean liner hit an iceberg and sunk in the early hours of the next day. Only 705 would survive the freezing waters of the Atlantic.

The sinking of the Titanic is the most famous maritime disaster in history, and now you can own a small part of that story with this Titanic Tribute Collection. Here we’ve assembled five U.S. coins that were all freshly struck in 1912 and may have been sitting in the pockets of those anxiously awaiting the ship’s arrival in New York! The coins are:

The dime, quarter and half dollar each come struck in 90% fine silver, and every coin comes in Very Good (VG) condition. In addition, each set will come beautifully housed in a custom thematic card for optimal viewing and display.

The sinking of the Titanic on her maiden voyage was a dramatic tragedy that still captivates us today. The great ship’s opulent luxury, it’s “A” list of elite passengers, the band playing on amid the impending doom while chivalric passengers observed the rule of “women and children first” all combine to paint a romantic picture of that fateful night – a night that has been etched in history for more than 100 years! Don't let this historic set sail by – strike now and order yours today!