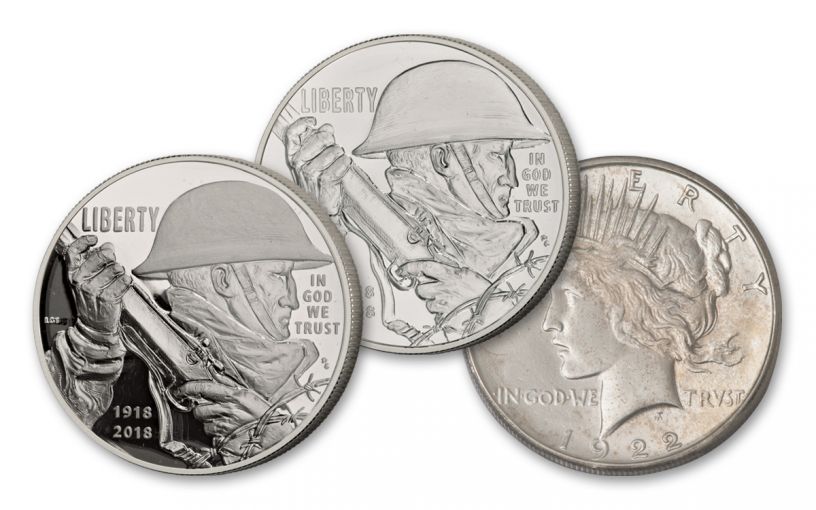 Availability: In Stock
This item will ship within 2 business days.
Item #
331341
Review this product
CC Payments as low as
$149.98 / month
Add to Wish List Add to Wish List Wishlist is for registered customers. Please login or create an account to continue. Add to Compare
Complete your collection with one of these:
Product Description

Honoring the Heroes of World War I A Century Later

During The Great War, approximately 4 million American men and women served in uniform – half of them overseas. Within months of entering the trenches in Europe, these American heroes helped Allied forces achieve victory in 1918.

100 years later, the World War I American Veterans Silver Dollar has been released to honor their service. Sculpted by retired U.S. Mint lead sculptor Don Everhart, the design comes from LeRoy Transfield of Orem, Utah, who won the U.S. Treasury’s open call for artists. Transfield captures the patriotic resolve of a U.S. soldier, paired with a design reminding us all that war is never the end.

In 1915, Lieutenant Colonel John McCrae wrote “In Flanders Fields,” a poem inspired by the sight of poppies overflowing a field that had been all but destroyed by the blasts and bombs of war. The poppy has since become an international symbol of remembrance for the veterans who served in World War I.

This three-piece set includes both the bullion and Proof version of this coin, graded by the Numismatic Guaranty Corporation (NGC) as Mint State-70 (MS70) condition and Proof-70 Ultra Cameo (PF70 UC), respectively.  Both coins have also been certified as Early Releases. Both coins are official legal tender struck in 90% silver, and both bear labels personally signed by Everhart.

You’ll also receive a 1922 Peace Silver Dollar, a series struck as a result of the war’s end. This coin comes certified by NGC in Mint State-64 (MS64) condition.

For collectors of European history, military history or American history, this 1922-2018 $1 Peace/WWI Veterans Silver Dollar 3-Coin Set is a reverent reminder of our troops' bravery and selflessness a century ago. Don't miss out on your chance to add this set to your collection – bring these stunning coins home today.