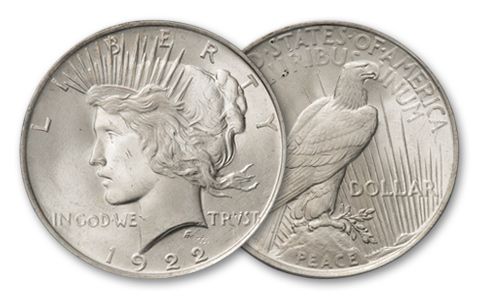 Availability: Available for Order
This item will ship 06/16/21
Item #
249018
Add to Wish List Add to Wish List Wishlist is for registered customers. Please login or create an account to continue. Add to Compare

After Morgans went to war, a new U.S. Silver Dollar forged the peace.

It's 1921: the Great War is over, and the American economy is booming. So, the U.S. Mint strikes its last Morgan Silver Dollar - and prepares to release a brand new coin to celebrate a world finally at peace. It was America's Peace Dollar, the last circulating 90% Silver Dollar ever issued in the U.S.

Why a new Silver Dollar? Rewind to the Pittman Act in 1918, which authorized the melting of some 270 million Morgan Silver Dollars for the war effort. It included the stipulation that following the war's end, all those melted Silver Dollars would have to be replaced. So, production of a newly-designed Silver Dollar began in December of 1921, when, for a few short weeks, the mint attempted a high-relief design like the Saint-Gaudens gold piece. But, the coins were just too difficult to strike. Since the mint needed to replace a considerable number of melted Morgans, it made a smart and timely decision: opting to strike a low-relief version for 1922's first full year of Peace Dollar production. Every Peace Dollar afterwards would follow suit. But, even with that time-saving tactic, the presses at the Philadelphia mint alone worked overtime - minting 51,737,000 of America's newest 90% Silver Dollar in 1922! At those numbers, you would think it would be easy to find a 1922-P Peace Silver Dollar in Brilliant Uncirculated condition today. However, you'd be wrong.

Just ten years after the first of these coins rolled off the presses, the U.S. was in the depths of the Great Depression. And, production of Peace Dollars would cease forever soon afterward. So, if you were lucky enough to have a 1922 Peace Dollar back then, it's likely you would have spent it on bread, milk or gas. They bought a lot. And, they were used over and over again until they wore out. But, each of the Brilliant Uncirculated (BU) condition coins we now have available look almost as new as they did when they were struck by the Philadelphia Mint almost a century ago.

You could pay as much as $479 for the short-lived 1921 high-relief Peace Dollar in BU condition. Or, you could add a Brilliant Uncirculated 1922 Peace Dollar to your collection for as little as $65.95 each! Three times fewer Peace Dollars were struck for circulation than their older silver sibling, the Morgan. But, as the heir to the throne, this 1922 Silver Dollar is one that no Morgan collection should be without! Order yours now!