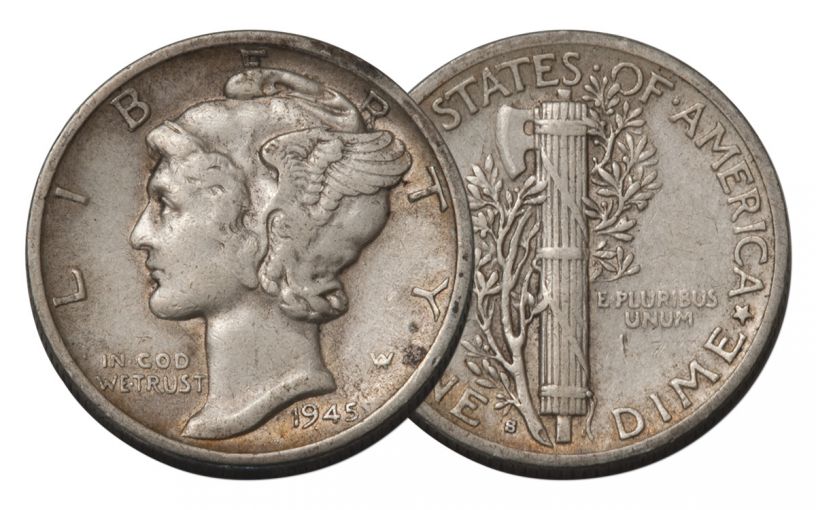 Availability: Out of Stock
This item is currently Out of Stock. Please sign up to be notified if this product becomes available.
Item #
308730
Add to Wish List Add to Wish List Wishlist is for registered customers. Please login or create an account to continue. Add to Compare

Numismatists with years of experience and those just learning about coin collecting all share a love for the Winged Liberty Head, or “Mercury” dime. This classic American coin series circulated from 1916 until 1945. The series was designed by Adolph A. Weinman who also designed the Walking Liberty Half Dollar that was introduced the same year. The obverse features the portrait of Lady Liberty wearing a winged Phrygian, or “Liberty” Cap. The wings are meant to symbolize Freedom of Thought. It is because of this winged cap that Liberty was confused with the Roman Messenger God, Mercury. The reverse features a fasces, which is a bound bundle of rods with an axe head meant to symbolize strength and unity. The axe is surrounded by an olive branch which symbolizes peace. It is at the base of the axe that the “micro S” mint mark appears.

The origin of the “Micro S” was really an exercise in thriftiness by mint employees. In 1907 the United States was making coinage for the Philippines at the San Francisco branch of the Mint. These smaller mint marks were left over from this production 37 years prior. They were used in the production of this classic final year of issue die variety that was first discovered by skilled Numismatists in 1947.  Don’t wait, order your highly collectible Mercury Dime Micro S die variety example today!