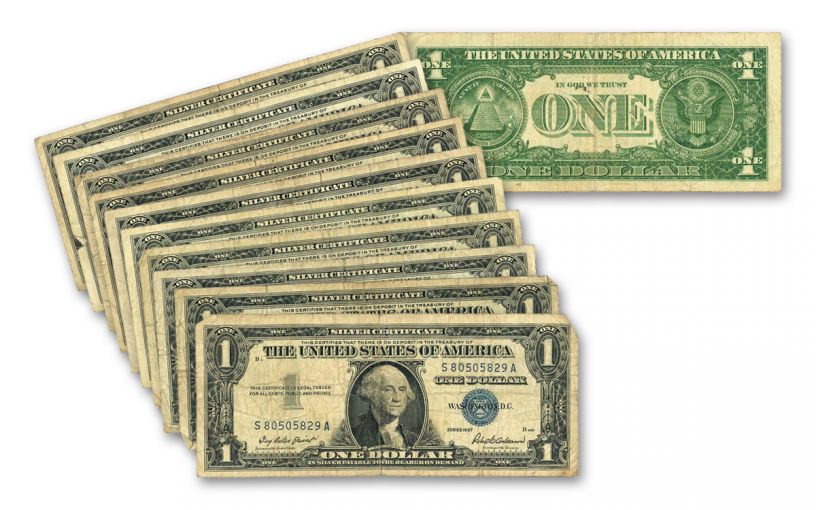 Availability: In Stock
This item will ship within 2 business days.
Item #
341878
Review this product
Add to Wish List Add to Wish List Wishlist is for registered customers. Please login or create an account to continue. Add to Compare
Product Description

In 1963, President John F. Kennedy signed Executive Order 1110, slowly halting the production of $1 Silver Certificates. That means the 1957 Series was the final year of the $1 Silver Certificates. These federally issued notes were as good as a silver dollar in your pocket – in fact that was exactly their purpose: any one of these notes could be taken into a bank and traded for a gleaming silver dollar.

Kennedy’s decision was prompted by the fact that the government was expecting a shortage of silver bullion. People who were still holding these $1 Silver certificates had until March 1964 to exchange these notes for silver coins. For the next four years, people could exchange the notes only for silver granules. The redemption period ended for good in 1968, making the notes that are left valuable collector items of a bygone era. In addition to the last-ever nature of these certificates, they are also significant for being the first to feature the motto “In God We Trust,” the result of a law signed by President Eisenhower in 1955.

If you were to hunt these notes down today and find them graded in Very Fine (VF) condition like the ones available in this offer, you could expect to pay as much as $12.50 per note. Now you can add these memorable keepsakes to your collection and save big in the process by securing a pack of ten notes – that’s less than $4 per note!!