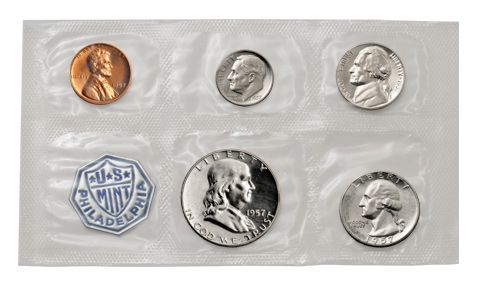 Availability: In Stock
This item will ship within 2 business days.
Item #
182999
Add to Wish List Add to Wish List Wishlist is for registered customers. Please login or create an account to continue. Add to Compare

About the sets: All Proof 1957 Half Dollars are of the Type II variety (see the descriptions under 1956 Proof Sets). 1957 Proof Coins are found with Brilliant, Cameo and Deep Cameo surfaces. Brilliant Proofs are the most common, Cameo Proofs of any denomination are fairly scarce, but Deep Cameo Proofs remain rare. Finding a Deep Cameo 1957 Proof Nickel is a real challenge. Beware of buying unopened 1957 Proof Sets. "Sealed" Sets are likely to contain substituted coins (and even non-coins). Flat packs should be examined for small tears or cracks in the pliofilm. Even a hole the size of a pin can let in oxygen or moisture, both of which will react chemically with the metal of a coin, causing unsightly spots.

Some 1957 Proof Sets may contain a rare Nickel with a Quadrupled Die Obverse (check "LIBERTY", the star, and the date).

Original packaging: Each coin was sealed in its own compartment between two sheets of flat pliofilm. An octagonal foil seal imprinted with "US MINT PHILADELPHIA" was placed in a sixth compartment, and the flat pack was then inserted into a mailing envelope with a card.