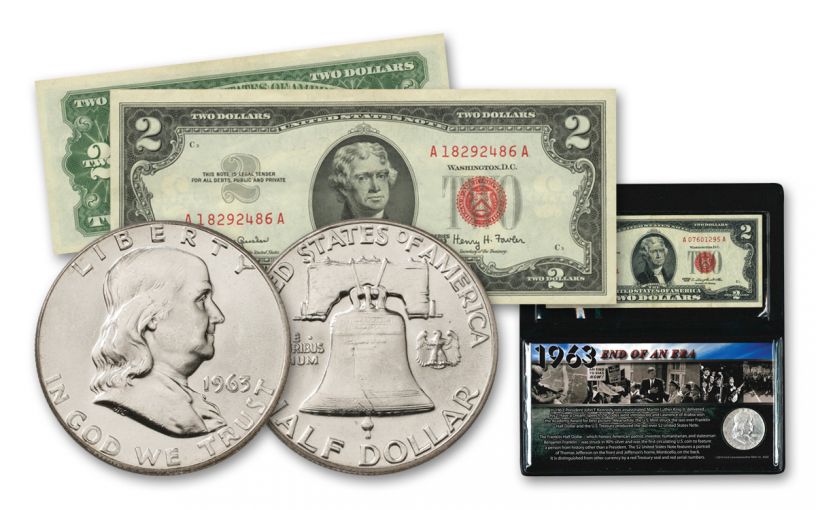 Availability: Available for Order
This item will ship 02/15/21
Item #
357514
Add to Wish List Add to Wish List Wishlist is for registered customers. Please login or create an account to continue. Add to Compare

Franklin and Jefferson – The End of an Era Set

In the fall of 1963, President John F. Kennedy was assassinated. In response, the United States Mint planned to temporarily cease production of the Franklin Half Dollar then in circulation for a one-year-only Commemorative Kennedy Half Dollar. But when the new coin proved to be incredibly popular with the public, the Mint decided to shelve the Franklin Half Dollar permanently.

Thus, the Benjamin Franklin Half Dollar – the first U.S. coin struck for circulation to feature a historical figure other than a president – became incredibly short lived. Minted only from 1948 to 1963, anyone under the age of 60 probably has never seen one of these wonderful coins.

That same year, the U.S. Treasury Department was attempting to simplify its paper currency by phasing out all but Federal Reserve Notes. Among those notes receiving the axe were United States Notes. Featuring bright red seals and serial numbers, United States Notes were the first national currency. They were authorized by the Legal Tender Act of 1862 and began circulating during the Civil War. The government began pulling them from circulation in 1963 and they haven’t been seen since!

This set marks the end of an era by bringing together a 1963 Franklin Half Dollar and a 1963 $2 Jefferson United States Note. Out of issue for more than 50 years, both pieces come beautifully presented in a custom wallet-sized display holder with a fact-filled storycard. Begin a new era in your collection and secure this set today!