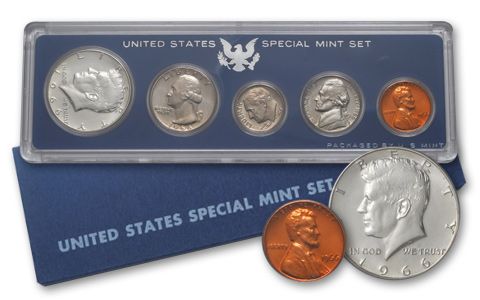 Availability: Available for Order
This item will ship 03/23/21
Item #
182889
Add to Wish List Add to Wish List Wishlist is for registered customers. Please login or create an account to continue. Add to Compare

While the Treasury waited to declare the coinage shortage over, the Special Mint Set program was continued for another year. Sales dropped slightly, indicating the collecting public's dissatisfaction with the product. Orders for the 1966 Special Mint Sets were limited to 25 sets per person.

In 1966, the initials "FS" (for the designer, Felix Schlag) were added to the obverse of the Nickel. Two Proof Nickels were struck in 1966 (most likely in Philadelphia) and presented to Schlag. Their whereabouts are unknown. Some 1966 Special Mint Sets may contain a very scarce, but spectacular Doubled Die Obverse Half Dollar (examine "IN GOD WE TRUST", Kennedy's chin, nose, ear and eye.). Another very rare Half Dollar is found with the designer's initials (FG) missing on the reverse, due to excessive polishing of the die.

India and Pakistan fought a short, undeclared war over the disputed area of Kashmir.