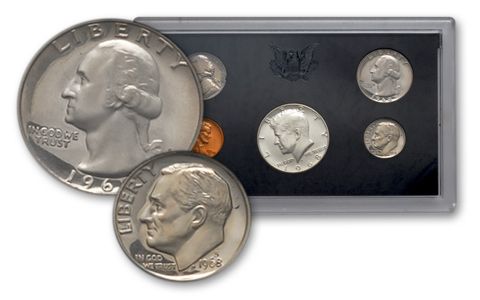 Availability: In Stock
This item will ship within 2 business days.
Item #
222233
Add to Wish List Add to Wish List Wishlist is for registered customers. Please login or create an account to continue. Add to Compare

Proof Set production resumed in 1968, much to the delight of collectors around the nation. Sales zoomed to over 3,000,000 sets, and might have been higher if the Treasury had not hiked the price of the sets to $5.00. Proof Set production was shifted to San Francisco, and the "S" mintmark was added to Proof Coins for the very first time. The mintmark was moved to the front of the coin, an innovation that created additional demand for the sets. 1968 also saw the re-introduction of the "Proof-only" concept, where certain Proof coins were unavailable in a regular version (in 1968, this included the Proof-only 1968-S Dimes, Quarters and Half Dollars).

About the sets: 1968-S Proof Coins are found with Brilliant, Cameo, and Deep Cameo surfaces. Deep Cameo Proof coins are the most desirable of the three finishes.

A very small number of Proof 1968-S Dimes were struck without a mintmark. Although Proof coins were being struck at the San Francisco Mint at the time, responsibility for making the Proof dies (and adding the mintmark) rested with the Philadelphia Mint. Apparently, at least one die was sent from Philadelphia without the mintmark and a small number of "S"-less Dimes were struck and released before the error was discovered. Less than two dozen of the "S"-less 1968-S Proof Dimes are known to exist. Because the "S"-less Proof sets are valuable, be sure to examine the case for signs of tampering and substitution. Do not purchase an individual "S"-less Dime or complete Proof Set unless it has been authenticated by an expert.

A number of different and exciting very rare varieties may be hiding in your 1968-S Proof Set:

• Doubled Die Reverse Dime – check any of the reverse lettering, the torch, and the leaves

• Doubled Die Obverse Quarter – check "IN GOD WE TRUST"," LIBERTY", and the date

• Doubled Die Reverse Quarter – check any of the reverse lettering

• Doubled Die Obverse Half Dollar – check "IN GOD WE TRUST"

Original packaging: The individual coins of the 1968-S Proof Set were inserted into holes in a black plastic insert, then sealed in a two-piece, clear plastic case. The case was then inserted into a protective outer cover consisting of blue cardboard imprinted with "United States Proof Set • 1968."