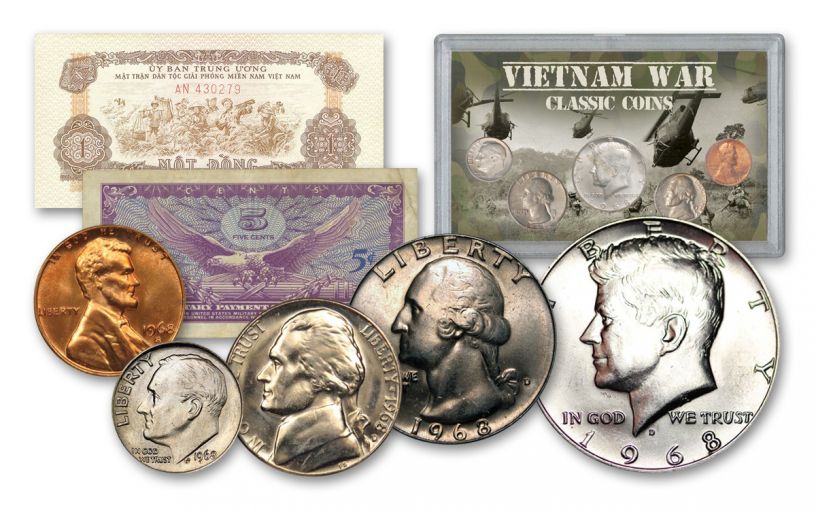 Availability: In Stock
This item will ship within 2 business days.
Item #
342125
Review this product
Add to Wish List Add to Wish List Wishlist is for registered customers. Please login or create an account to continue. Add to Compare
Complete your collection with one of these:
Product Description

This set takes you back to 1968 – a year that became a major turning point of the Vietnam War due to the full-scale assault by the North Vietnamese forces known as the Tet Offensive.

In this collection, you’ll take home each circulating denomination of pocket change used back at home – the one-cent, five-cent, ten-cent, twenty-five-cent and 50-cent pieces. In addition, you’ll receive two unique notes that circulated during this period overseas: A Series 641 Military Payment Certificate (MPC) used by U.S. troops, and a genuine North Vietnam Mot Dong note used by Viet Cong forces during the war. Both of your notes will come in Lightly Circulated condition – perfect for display, each is an incredible piece of history from one of America’s most turbulent eras.

Between August 31, 1965 and October 21, 1968, U.S. troops were issued a variety of Military Payment Certificates (MPC) from the Series 641 issue. Unlike standard U.S. currency, these notes were issued only to soldiers serving overseas, and were created to be tightly controlled and demonetized at a moment’s notice.  The first military note series ever issued in Vietnam included Five Cent, Ten Cent, Twenty-Five Cent, Fifty Cent, One Dollar, Five Dollar and Ten Dollar certificates. Each circulated for only a short period of time, and most were destroyed.

Mot Dong notes were issued by North Vietnam and used by Viet Cong forces operating in Vietnam during the war. These “VC notes” were often very colorful and depicted both idyllic images of Vietnam from people harvesting rice and schoolchildren at their desks, to militaristic motifs like women armed with rifles and soldiers in battle.

North Vietnam’s Tet Offensive in early 1968 was intended to spur a popular uprising in South Vietnam. Instead, while U.S. forces achieved a tactical victory, they lost the battle on the American home front for what was now becoming an unpopular war. This set is a fascinating look at the Vietnam War told in a way only numismatics can tell. Secure yours now while our limited supply lasts!

Honor the sacrifices made by U.S. forces 50 years ago during the 1968 Tet Offensive with this Vietnam War-Era Tribute Set. Click one to your cart today!