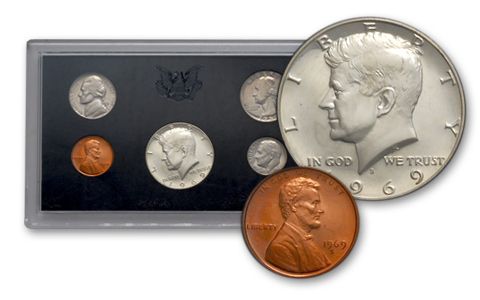 Availability: Available for Order
This item will ship 05/19/21
Item #
222234
Add to Wish List Add to Wish List Wishlist is for registered customers. Please login or create an account to continue. Add to Compare

1969 brings an end to the era of precious metal in U.S. coinage for circulation. The 1969 Kennedy Half Dollar was the last coin to be placed into circulation that contained any precious metal. 1969 Proof Set sales were very strong.

About the sets: 1969-S Proof Coins are found with Brilliant, Cameo, and Deep Cameo surfaces. Deep Cameo Proof coins are the most desirable of the three finishes.

Some 1969-S Proof Sets may contain a very rare Doubled Die Obverse Quarter (examine "LIBERTY, IN GOD WE TRUST" and the date).

Original packaging: The individual coins of the 1969-S Proof Set were inserted into holes in a black plastic insert, then sealed in a two-piece, clear plastic case. The case was then inserted into a protective outer cover consisting of blue cardboard imprinted with "United States Proof Set • 1969."