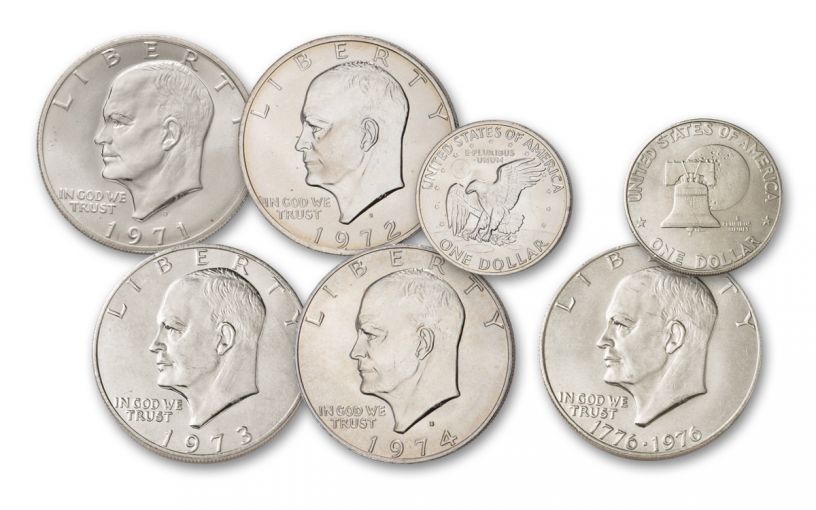 Availability: In Stock
This item will ship within 2 business days.
Item #
340612
Add to Wish List Add to Wish List Wishlist is for registered customers. Please login or create an account to continue. Add to Compare
Recommended Products
Product Description

Of all the branches of the U.S. Mint, only the San Francisco Mint struck Eisenhower Dollars in 40% fine American silver – and only for five years! We challenged ourselves to assemble as many 5-coin Eisenhower Silver Dollar collections as possible, and now you can secure one for less than $16 per coin!

This set includes the 1971, 1972, 1973 and 1974 Ike Silver Dollars, featuring Eisenhower on the obverse and a version of the Apollo 11 mission patch design on the reverse to commemorate man’s first steps on the lunar surface. You’ll also receive the redesigned 1976-S Bicentennial Silver Dollar, which features the Liberty Bell on the reverse before a full moon. This set sells elsewhere for as much as $199. Save nearly $120 by ordering your set right here, right now!

Struck only from 1971-1978, it’s been 40 years since the last Ike Dollars rolled off the presses at the U.S. Mint. The last of the large-sized dollar coins, many Ike Dollars can command high prices – especially the Uncirculated collector versions like these struck in 40% silver. Finding one of these beauties todays is tough enough let alone securing a complete set of San Francisco Silver Ikes.

With the popularity of Eisenhower, the 50th anniversary of the Apollo 11 moon landing, and the limited number of sets available, there’s no guarantee how long our supply will last. Order yours now!