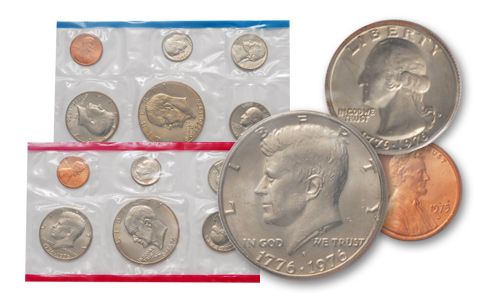 Availability: In Stock
This item will ship within 2 business days.
Item #
182898
Add to Wish List Add to Wish List Wishlist is for registered customers. Please login or create an account to continue. Add to Compare

Beginning in 1975, S-Mint Cents were no longer made for circulation, and thus were no longer included in the Government-issued Mint Sets. To obtain a 1975-S Cent (or, for that matter, any other 1975 denomination from the San Francisco Mint), collectors had to purchase a 1975-S Proof Set.

About the sets: The coins in the 1975-PD Mint Sets were Uncirculated pieces pulled from regular production runs, thus the quality of the individual coins varies widely from set to set, and even within a set.

The 1975-PD Mint Set contained twelve coins, including the following:

Original packaging: The coins in the 1975-PD Mint Set were sealed in two pliofilm flat packs: the D-Mint coins were placed together in one of the packs, and the P-Mint coins were placed together in another. The pack containing the D-Mint coins was edged in red; the pack containing the P-Mint coins was edged in blue. The two pliofilm packs and two pieces of thin cardboard (for protection) were sealed in an officially inscribed, white mailing envelope.

The Soviet Soyuz 19 docked in space with an American Apollo spacecraft. The city of Saigon fell following the surrender of South Vietnam to North Vietnam.