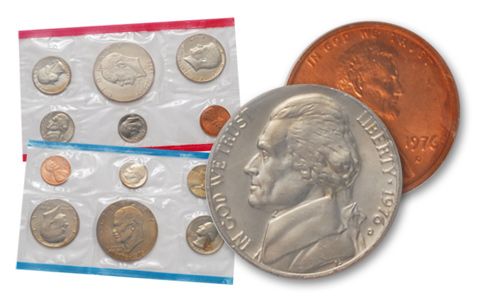 Availability: In Stock
This item will ship within 2 business days.
Item #
182900
Add to Wish List Add to Wish List Wishlist is for registered customers. Please login or create an account to continue. Add to Compare

Despite the attraction of the Bicentennial coins, sales of the 1976-PD Mint Set dropped slightly from the previous year. Apparently, the public favored the 40% Silver versions over the Copper-Nickel Clad versions, snapping up the three-piece Bicentennial Mint Sets at a rate of more than two to one.

About the sets: The coins in the 1976-PD Mint Sets were Uncirculated pieces pulled from regular production runs, thus the quality of the individual coins varies widely from set to set, and even within a set.

The 1976-PD Mint Set contained twelve coins, including the following:

Original packaging: The coins in the 1976-PD Mint Set were sealed in two pliofilm flat packs: the D-Mint coins were placed together in one of the packs and the P-Mint coins were placed together in another. The pack containing the D-Mint coins was edged in red; the pack containing the P-Mint coins was edged in blue. The two pliofilm packs and two pieces of thin cardboard (for protection) were sealed in an officially inscribed, white mailing envelope.