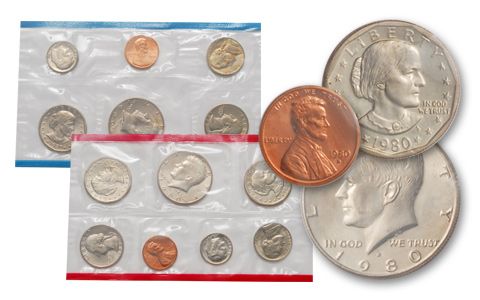 Availability: In Stock
This item will ship within 2 business days.
Item #
182904
Add to Wish List Add to Wish List Wishlist is for registered customers. Please login or create an account to continue. Add to Compare

The 1980 Mint Set has the third highest mintage of any Mint Set issued since 1976. 1980 was the first time in history that Mint Sets contained Dollars from all three issuing mints which increased the demand for this set. From 1980 on, a small letter "P" appears as a mintmark on all coins issued by the Philadelphia Mint, except for the Cent.

About the sets: The coins in the 1980-PDS Mint Sets were Uncirculated pieces pulled from regular production runs, thus the quality of the individual coins varies widely from set to set, and even within a set.

Some 1980 Mint Sets contain a nice 1980-D Nickel with a Doubled Die Reverse (check any of the reverse lettering for doubling).

The 1980-PDS Mint Set contained thirteen coins, including the following:

Iraq invaded Iran, beginning the eight-year Iran-Iraq war. A botched desert raid by the Americans failed to rescue any of the hostages held in Iran.