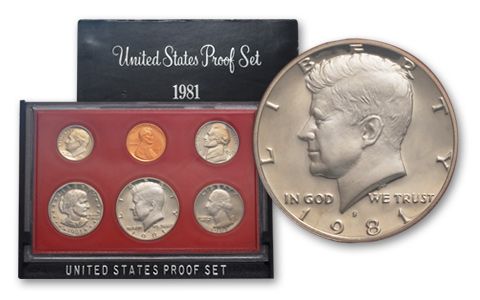 Availability: In Stock
This item will ship within 2 business days.
Item #
222249
Add to Wish List Add to Wish List Wishlist is for registered customers. Please login or create an account to continue. Add to Compare

The 1981-S Proof Set contained the last Susan B. Anthony Dollar ever issued in the Proof Set. However, the design was resurrected in 1999 for one more year, but never issued in Proof Sets or Mint Sets. Like the 1979-S Proof Set, the 1981-S is found with two types of mintmarks "Round Top and Plato (Flat) Top", with the "Plato (Flat) Top" variety being considerably more valuable than the Round Top.

About the sets: All coins in the 1981-S Proof Set were intended to have a Cameo or Deep Cameo Finish.

The coins in the 1981-S Proof Set come with two distinctly different mintmarks, known as Type 1 and Type 2. The Type 1 variety (or "Round Top" variety) is actually a worn version of the "Plato (Flat) Top" Type 2 variety of 1979, which had deteriorated by 1981. On the Type 2 variety, the mintmark is clearly defined, and the serifs are separated from the diagonal stroke of the "S". Of the two varieties, the Type 2 "Plato (Flat) Top S" is the more desirable. The most valuable 1981-S Proof Sets are those in which all of the coins are of the Plato (Flat) Top S variety; the value of partial sets drops dramatically, depending on the number of "Plato (Flat) Top S" coins in the set. The Dollar and Cent Type 2 carry the biggest premium.

Original packaging: The coins of the 1981-S Proof Set were placed in individual holes in a red plastic insert, then sealed in a two-piece, clear plastic case. The clear plastic case containing the coins slid into a molded, black plastic frame, with the raised silver letters "UNITED STATES PROOF SET" for storage. For display purposes, the frame served as a base for the case containing the coins, which fit into a slot in the frame. A black card slipcase, imprinted in silver with the words: "United States Proof Set • 1981", protected both the case and the frame.