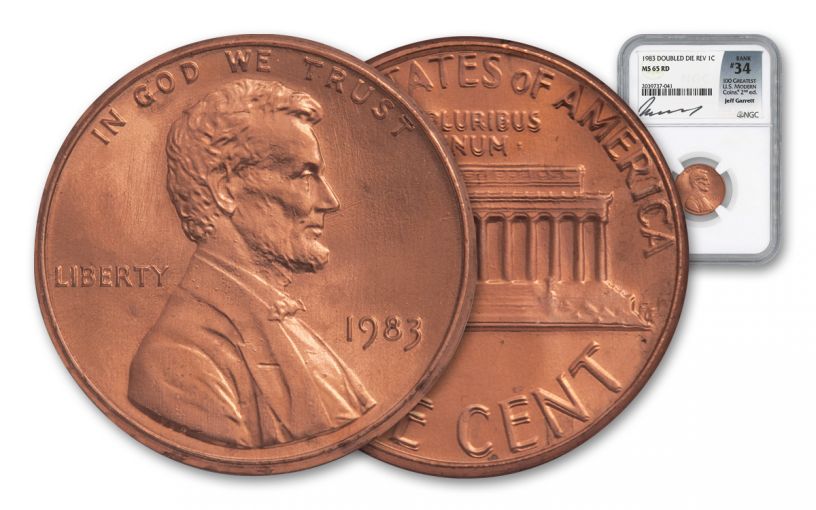 Availability: Call-In Only
This item is only available on a Call-In basis. Please call 1-800-510-6468 to speak to a representative.
Item #
250762
Add to Wish List Add to Wish List Wishlist is for registered customers. Please login or create an account to continue. Add to Compare
Recommended Products
Product Description

According to numismatist and author Jeff Garrett, the 1983 Doubled Die Reverse Lincoln cent is the most dramatic of any doubled-die reverse (DDR) in the entire Lincoln cent series, with prominent, well-separated doubling throughout all of the reverse legends. It's also very difficult to come by -- in 1984, U.S. Mint Assistant Director for Technology George Hunter stated that only about 5,000 entered circulation before the error was discovered and the die destroyed. Now, imagine how many of those 5,000 were ignored, wearing down over time, and you'll see why Garrett listed it as #34 in his book, 100 Greatest U.S. Modern Coins, 2nd Edition. Get yours graded in amazing Mint State-65 Red Designation (MS64RD) by Numismatic Guaranty Corporation (NGC) with Jeff Garrett's hand-signed label!

Today, fewer than 5,000 of these Doubled Die Reverse coins are known to exist. Now you can obtain an example of this scarce mint error, graded MS65RD by Numismatic Guaranty Corporation (NGC) and add it to your collection!

ONE OF THE MOST POPULAR MINT ERRORS OF ALL TIME-- One of the most popular and unusual U.S. mint errors ever produced and released into general circulation.

DRAMATIC DOUBLED DIE-- According to Jeff Garrett, the 1983 Doubled-Die Reverse Lincoln cent is the most dramatic of any doubled-died reverse in the entire Lincoln cent series. It features prominent, well-separated doubling throughout all of the reverse legends with a second impression on all of the reverse wordings, shifted upwards, above the image below.

RANKED #34 AND SIGNED BY JEFF GARRETT-- Considered by coin professional and president of the American Numismatic Association Jeff Garrett as the most dramatic of any doubled die reverse in the entire Lincoln Cent series. Garrett ranked this Lincoln Cent #34 coin in his book 100 Greatest U.S. Modern Coins, 2nd Edition. Your coin's label will feature Garrett’s hand signature.

AMAZING QUALITY-- This coin has achieved a grade of MS65RD and is a level of quality authenticated and certified by NGC. Often sought after by collectors, the Red Designation (RD) means the red dies remain prevalent on the coin face, an appealing and rare trait.

SONICALLY SEALED-- After a grade is assigned, each coin is sonically sealed in an acrylic holder, preserving the coin's condition.

A genuine mint error with such a low availability is destined to get scarcer as time moves on and more collectors are attracted to assembling collections of modern U.S. Mint error coins. Don't make your own error -- order yours now.