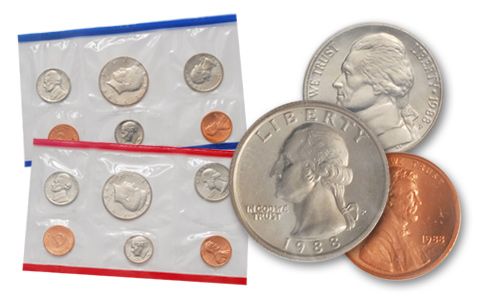 Availability: In Stock
This item will ship within 2 business days.
Item #
182910
Add to Wish List Add to Wish List Wishlist is for registered customers. Please login or create an account to continue. Add to Compare

The 1988 Mint Set mintage was off by 1.2 million from the 1987 set. This set is much more rare than even many experts realize.

About the sets: The coins in the 1988-PD Mint Sets were Uncirculated pieces pulled from regular production runs, thus the quality of the individual coins varies widely from set to set, and even within a set.

The 1988-PD Mint Set contained ten coins, including the following:

Original packaging: The 1988-PD Mint Set consisted of two pliofilm packs. The first one contained the Philadelphia Mint coins and a Cent-sized token with a large "P" (for Philadelphia), while the second pack contained coins from the Denver Mint, plus a token with a large letter "D." The pack containing the D-Mint coins was edged in red; the pack containing the P-Mint coins was edged in blue. The two pliofilm packs and a card listing the specifications for each coin were then sealed in an officially inscribed mailing envelope (this package is very brittle; handle with care).

George Bush and his running mate, Dan Quayle, won the Presidential and Vice-Presidential elections, respectively. The cost of a First Class postage stamp rose to 25 Cents.