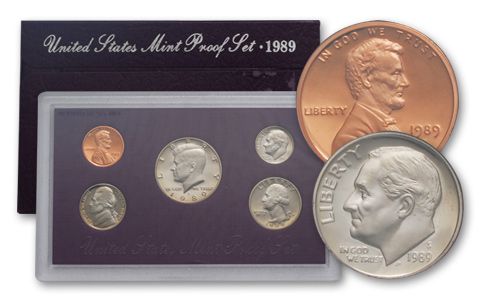 Availability: In Stock
This item will ship within 2 business days.
Item #
222257
Add to Wish List Add to Wish List Wishlist is for registered customers. Please login or create an account to continue. Add to Compare

Sales of the 1989-S Proof set exceeded 3 million sets by just a smidgen, reflecting both a strong economy and a strong interest in coin collecting.

About the sets: All coins in the 1989-S Proof Set were intended to have a Cameo or Deep Cameo Finish.

Original packaging: The coins of the 1989-S Proof Set were placed in individual holes in a purple-colored, textured paper and cardboard insert, then sealed in a two-piece, clear plastic case. The case was then inserted into a protective outer cover, consisting of purple cardboard, imprinted with the somewhat confusing silver words: "United States Mint Proof Set • 1989." The new collector might ask, "Is this a Mint Set or a Proof Set?"