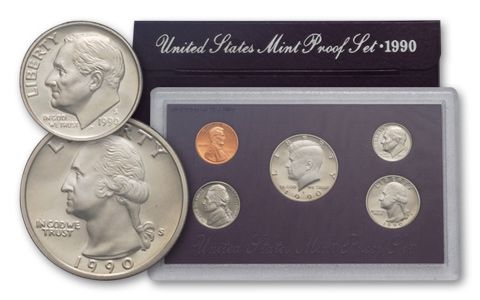 Availability: Available for Order
This item will ship 05/26/21
Item #
222258
Add to Wish List Add to Wish List Wishlist is for registered customers. Please login or create an account to continue. Add to Compare

Proof Set sales dipped slightly again in 1990, even though the issue price remained at $11.00, making this set a little tougher to find.

About the sets: All coins in the 1990-S Proof Set were intended to have a Cameo or Deep Cameo Finish.

Some 1990-S Proof Sets contain Cents that lack the "S" mintmark. These are mistakes that were made when the Philadelphia Mint (responsible for producing the dies for the San Francisco Mint) failed to add the mintmark to a Proof obverse die. Approximately 3,500 "S"-less Cents were produced, with an unknown quantity going into the Prestige Sets of this year.

Original packaging: The coins of the 1990-S Proof Set were placed in individual holes in a purple-colored, textured paper and cardboard insert, then sealed in a two-piece, clear plastic case. The case was then inserted into a protective outer cover, consisting of purple cardboard, imprinted with the somewhat confusing silver words: "United States Mint Proof Set • 1990." The new collector might ask, "Is this a Mint Set or a Proof Set?"