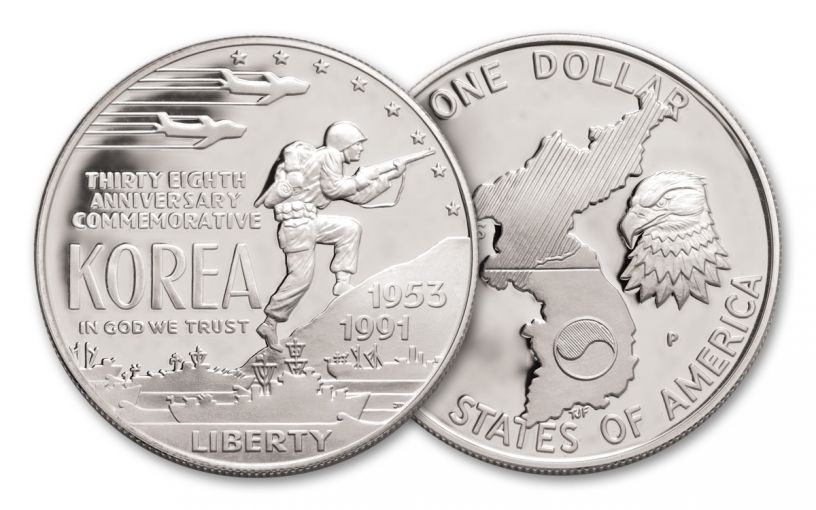 Availability: Out of Stock
This item is currently Out of Stock. Please sign up to be notified if this product becomes available.
Item #
242408
Add to Wish List Add to Wish List Wishlist is for registered customers. Please login or create an account to continue. Add to Compare

Overshadowed by World War II and the Vietnam War, the Korean War has often been called the “Forgotten War” in the United States. A bloody three-year conflict that pitted American troops against communist forces from North Korea and China, other countries in the United Nations contributed troops, but Americans did most of the fighting. Coverage of the conflict was heavily censored at the time from a public weary of such news just five years after the end of World War II.

When the Korean War ended in 1953, the tiny nation was divided into North and South Korea separated by the 38th parallel. It was only fitting then that on the 38th anniversary of the war’s end the U.S. Mint released this commemorative silver dollar which paid tribute to those who served in the often-overlooked conflict. Struck in 90% silver, the legal-tender coin is rife with symbolism. John Mercanti’s obverse design shows an infantry soldier charging up a hill with naval ships in the foreground and two aircraft flying above. The coin’s reverse is equally poignant. Designed by T. James Ferrell, it shows a map of Korea with North and South divided at the 38th parallel. Along side the map is an Eagle head and a “yin and yang” symbol.

Pay tribute to the forgotten heroes of the Korean War with the 1991-P $1 Korean War Silver Commemorative Proof. Click one to your cart today!