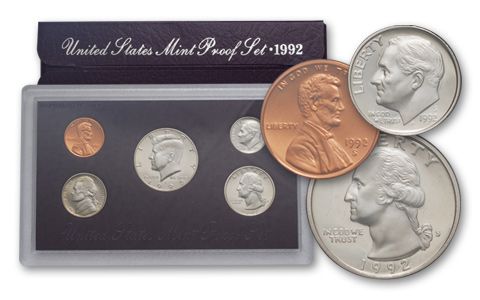 Availability: In Stock
This item will ship within 2 business days.
Item #
222261
Add to Wish List Add to Wish List Wishlist is for registered customers. Please login or create an account to continue. Add to Compare

In 1992, the Mint offered four different Proof Set versions to collectors: the regular 1992-S Proof Set, the 1992-S Prestige Set, the new 1992-S Silver Proof Set (same as the regular Proof set, except the Dime, Quarter, and Half Dollar were made of 90% pure silver, instead of Clad Copper-Nickel), and the 1992-S Silver Premier Set (same as the Silver Set, but in fancier packaging). Collectors started to feel the pinch - the cost of all four Proof Set versions was $125.00! Interest in the regular 1992-S Proof Set was up slightly higher from 1991.

About the sets: All coins in the 1992-S Proof Set were intended to have a Cameo or Deep Cameo Finish.

Original packaging: The coins of the 1992-S Proof Set were placed in individual holes in a purple-colored, textured paper and cardboard insert, then sealed in a two-piece, clear plastic case. The case was then inserted into a protective outer cover, consisting of purple cardboard imprinted with the somewhat confusing silver words: "United States Mint Proof Set • 1992." The new collector might ask, "Is this a Mint Set or a Proof Set?"