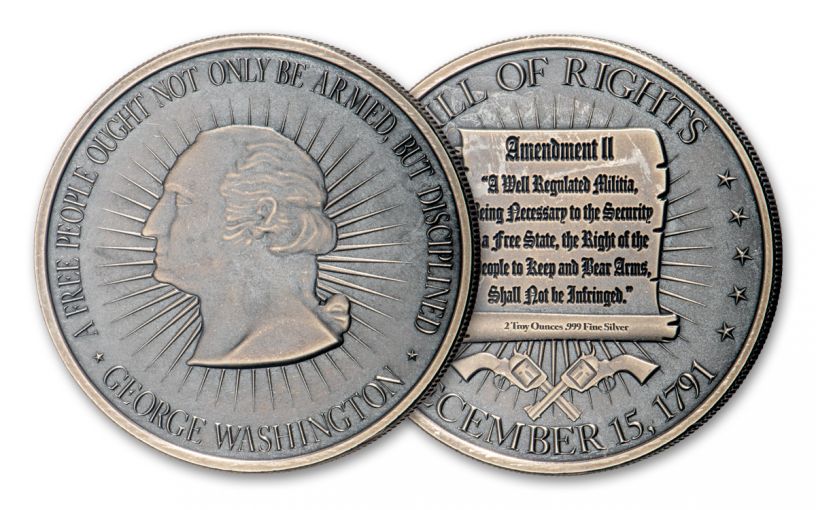 Availability: In Stock
This item will ship within 2 business days.
Item #
346798

The Right to Bear Arms

Struck in two troy ounces of 99.9% fine silver, this beautifully antiqued medal is the perfect way to show your support for the Second Amendment. On the obverse is a bust of President George Washington along with his famous quote “A free people ought not only be armed, but disciplined.” The reverse displays the verbiage of the Second Amendment in beautiful calligraphy under the words “Bill of Rights” and over a pair of crossed pistols and the date the Second Amendment was officially adopted.

Measuring 50 mm in diameter, this large Brilliant Uncirculated (BU) commemorative truly captures the spirit of one of the most important amendments to the Constitution. As one of the original 10 amendments that make up the Bill of Rights, the Second Amendment not only ensures that private citizens have the right to bear arms, but that the federal government should have no authority to disarm the citizenry. And despite modern debate, this right has remained a core truth for nearly 230 years.

The right to bear arms is as American as baseball, hot dogs, apple pie and the Super Bowl. The Second Amendment of the Bill of Rights helps keep our nation safe from both foreign threats as well as government tyranny. The perfect gift for any patriot, order one – or several – of these pure silver commemoratives today!

The Second Amendment helps protects this nation from tyranny and this commemorative will make a great gift or addition to any patriotic collection.