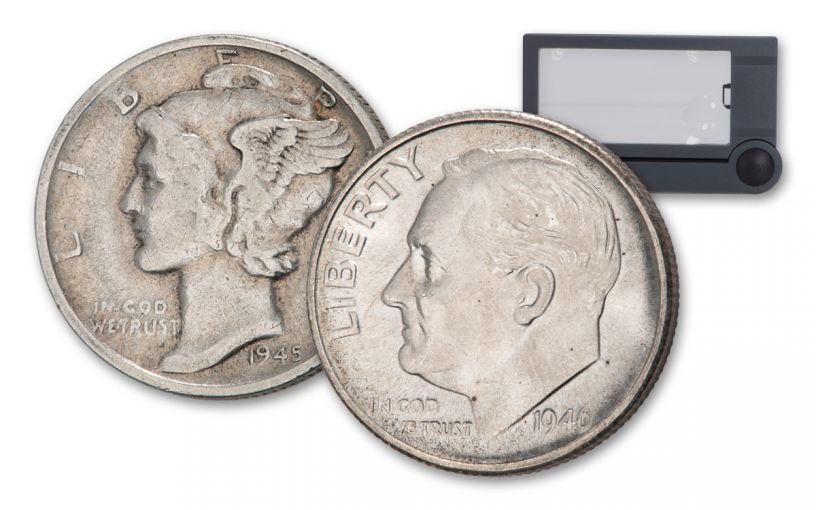 Availability: Out of Stock
This item is currently Out of Stock. Please sign up to be notified if this product becomes available.
Item #
338068
Add to Wish List Add to Wish List Wishlist is for registered customers. Please login or create an account to continue. Add to Compare

The Changing of the Ten-Cent Guard

Any collector worth their salt will tell you that the most important coins of any series are generally the first- and last-year issues. Without these bookends, your collection simply isn’t complete! This two-coin set brings together the last-year-of-issue 1945-S Mercury Dime (also known as the Winged Head Liberty Dime) and the first-year-of-issue 1946 Roosevelt Dime! The Mercury Dime is also one of the major varieties of the series, featuring a micro “S” mint mark. It comes in Extremely Fine (XF) condition—not bad for a coin struck the final year of World War II! The Roosevelt Dime comes in Brilliant Uncirculated (BU) condition, struck in the same 90% silver fineness as its predecessor.

Though it’s common knowledge today that President Franklin Delano Roosevelt was paralyzed from the effects of polio, few people were aware of this during his presidency. That’s why following his death in 1945 the dime was chosen as the coin to be revamped with Roosevelt’s image due to the fallen President’s efforts in the founding of the National Foundation for Infantile Paralysis. The non-profit organization was later renamed the March of Dimes after a fundraising effort in 1938 urged people to contribute to the organization by purchasing 10-cent lapel pins.

The Roosevelt Dime replaced the universally acclaimed “Mercury” Dime. Designed by Adolph A. Weinman, a noted American sculptor and a student of Augustus Saint-Gaudens, the Mercury Dime is today considered to be one of the most beautiful American coins ever struck by the U.S. Mint. The wings depicted on Miss Liberty’s were supposed to represent freedom of thought, but for most people it looked to be a depiction of the Roman god Mercury and the nickname stuck.

Your coins will arrive housed in a square capsule and drawstring pouch along with a magnifying folding loupe to allow you to examine your coins in 2x or 6x magnification. Secure this “changing of the guard” set today!

Get the last-year 1945 Mercury Dime and the first-year 1946 Roosevelt Dime in one fantastic two-piece set now by clicking them to you cart right now!