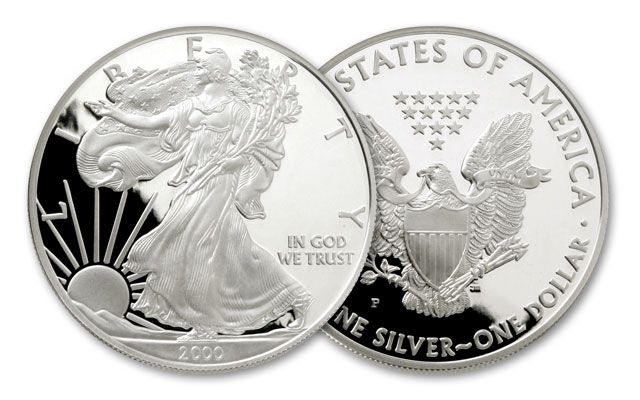 Availability: In Stock
Discontinued Product
Item #
227581
Add to Wish List Add to Wish List Wishlist is for registered customers. Please login or create an account to continue. Add to Compare

America’s finest silver is displayed in all its glory with the 2000 American Eagle Silver Dollar. Every year savvy buyers stash these away. Each is struck in stunning Proof condition in one ounce of 99.9% fine silver.

The Mint also capitalized on the turn of the new century by tying sales of 2000 Silver Eagles to the once-in-a-lifetime event. "The 2000 American Eagle Gold and Silver Proof Coins are the perfect collector's item to commemorate the year 2000," said Acting Director John P. Mitchell. "Renowned as classics of American design, the Proof Eagles rank among the most admired and sought after coins in the world." Collectors responded enthusiastically, and 2000 Proof Silver Eagles sold out at the Mint before the year was over.

Also offered in 2000 was the Millennium Coinage and Currency Set, which included a 2000 American Silver Eagle, a Sacagawea Dollar and a $1 bill. Attracted by the special burnished surface on the Sacagawea Dollar, collectors quickly bought up all of the set's 75,000 units.

With an increase in mintage for both 2000 Silver Eagle bullion coins and 2000 Proof Silver Eagles—plus the inclusion of a Silver Eagle proof as part of a unique commemorative set—2000 was a good year indeed for the American Silver Eagle.