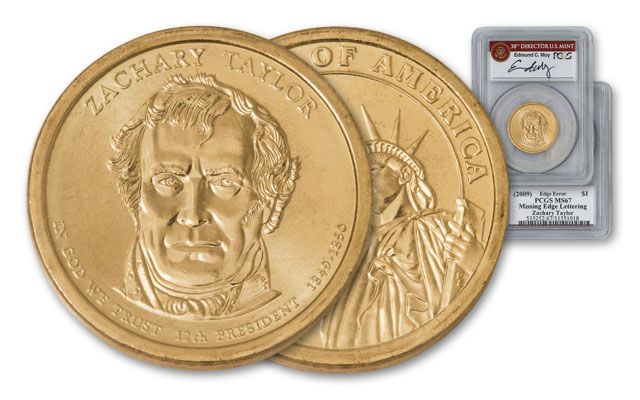 Availability: Out of Stock
Discontinued Product
Item #
264931
Add to Wish List Add to Wish List Wishlist is for registered customers. Please login or create an account to continue. Add to Compare

Three collector dreams come true with this 2009 Taylor Presidential Error. Not only is the coin a highly sought after mint error, it's also a super grade Mint State-67 (MS67) example certified by Professional Coin Grading Service and hand-signed by Mint Director Edmund Moy. The U.S. Mint revised a decades old process of adding edge lettering when the Presidential Dollars were first struck in 2007. The edge lettering is supposed to contain the year, the mintmark and the motto "E Pluribus Unum". It mostly worked fine, but a small number of coins missing the edge lettering escaped the mint.

This 2009 Taylor Dollar is just such a coin.

Zachary Taylor won election as the 12th President of the United States in 1848. He was commissioned as an officer in the U.S. Army in 1808 and made a name for himself in the War of 1812. He climbed the ranks and earned the nickname "Old Rough and Ready". The Mexican–American War broke out in May 1846, and Taylor led American troops to victory in a series of battles. He became a national hero, and political clubs sprang up to draw him into the upcoming election of 1848. Taylor died at 10:35 p.m. on July 9, 1850 as the result of an illness contracted on July 4th of that year.

This 2009 Taylor Missing Edge Lettering Presidential Error Dollar grades PCGS Mint State-67 (MS67). It's rare to find such a scarce coin in such a high grade. Add it to your collection before our small supply is gone!