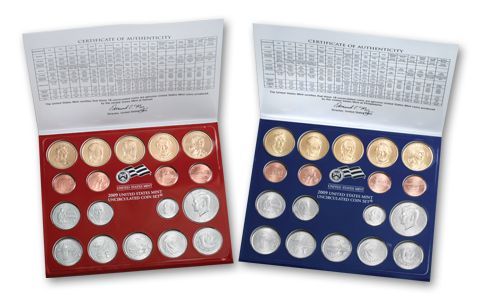 Availability: Out of Stock
This item is currently Out of Stock. Please sign up to be notified if this product becomes available.
Item #
182931
Add to Wish List Add to Wish List Wishlist is for registered customers. Please login or create an account to continue. Add to Compare

The 2009-PD Mint Set contained thirty-six coins, including the following:

One example of each of the following from the Philadelphia and Denver Mints: District of Columbia Quarter, Puerto Rico Quarter, Guam Quarter, American Samoa Quarter, U.S. Virgin Islands Quarter, and Northern Mariana Islands Quarter (all Copper-Nickel Clad). The four Presidential Dollars are William Henry Harrison, John Tyler, James K. Polk, and Zachary Taylor (Copper-Nickel Clad). The Native American Dollars contained within this set commemorate the spread of Three Sisters Agriculture around 1000 A.D. and feature a Native American woman planting seeds in a field of corn, beans and squash. The obverse retains the Sacagawea portrait from the previous Golden Dollar program.

About the sets: Featuring an impressive array of 36 coins, the 2009-PD Mint Set was the largest Mint Set ever released to date. It is notable for inclusion of the "District of Columbia and U.S. Territories" Quarters - an 11th year addition to the original ten-year 50 State Quarters program. The set is also highly collectible due to the fact that it includes four one-year-only design Lincoln Cents, issued to mark the centennial of the 1909 Lincoln Cent. It is also collectible for its inclusion of the first coins in the newly-launched Native American Dollar series.

US Airways Flight 1549 loses power in both engines shortly after takeoff, forcing the pilot to ditch the aircraft in the Hudson River. All 155 passengers and crew are rescued with no injuries, and the pilot is hailed as a hero. Exactly 17 months after its all-time high of 14,164 on October 9, 2007, the Dow Jones Industrial Average bottoms out at 6,547. To honor the 200th anniversary of the birth of U.S. President Abraham Lincoln, the U.S. Mint launches a series of pennies that commemorate four stages in Lincoln's life.

Three Somali pirates are killed in a sniper operation authorized by President Obama, freeing Captain Philips and ending a multi-day standoff between the United States Navy and the pirates. Rio de Janeiro, Brazil is chosen by the International Olympic Committee to host the 2016 Summer Olympic Games. The gamma ray burst GRB 090423 is observed for 10 seconds as the most distant object of any kind and also the oldest known object in the universe.