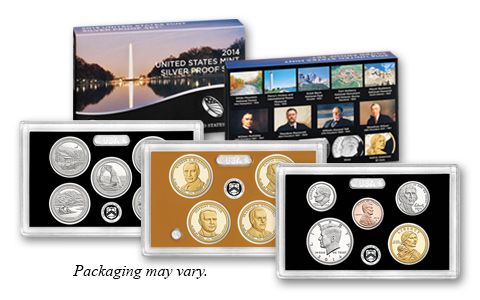 Availability: In Stock
This item will ship within 2 business days.
Item #
252595
Add to Wish List Add to Wish List Wishlist is for registered customers. Please login or create an account to continue. Add to Compare

The 2014 U.S. Silver Proof Sets are now available, so if you're a fan of these one-year-only collections of our country's current coins, you'll want to order this year's set today! You'll get all 14 of this year's coins struck in stunning Proof condition, including five America the Beautiful Quarters®, a Roosevelt Dime and Kennedy Half-Dollar in 90% pure silver, plus seven additional coins in Proof condition! Housed in their official packaging and accompanied by a Certificate of Authenticity from the U.S. Mint, this annual set is a perennial sellout, and a favorite of collectors new and old since they were first issued in 1992. Why? Because these one-year-only sets contain the absolute best of the best of U.S. coins! Proof struck coins are the ultimate in quality, beauty and value! Double-struck under intense pressure to bring out the high-relief details and dazzling luster, proofs have distinctive mirror-like backgrounds and frosted sculpted foregrounds. They are head and shoulders above your ordinary pocket change! We expect these one-year-only 2014 U.S. Silver Proof Sets to go fast, so don't wait to order yours!

The 2012 U.S. Silver Proof Set had the lowest mintage since the mint starting striking Silver Proof Sets in 1992, and surprised everyone when it sold out in just six months! The second-lowest mintage Silver Proof Set? 2013. So it's not a question of IF the 2014 set will sell out at the mint, but WHEN. And, how much MORE you'll have to pay on the secondary market to own one! (If you can find one at all!) Each 2014 U.S. Silver Proof Set includes seven 90% Silver Proofs. Each set includes the fifth year of the America the Beautiful Quarters® series, featuring Great Smoky Mountains National Park, Shenandoah National Park, Arches National Park, Great Sand Dunes National Park and Everglades National Park, plus a 2014 Roosevelt Dime and Kennedy Half-Dollar. Seven additional coins in Proof Condition. You'll also get the 2014 Lincoln Cent, Jefferson Nickel and Native American Dollar, plus four new one-year-only Presidential One Dollar Proofs honoring Warren Harding, Calvin Coolidge, Herbert Hoover and Franklin D. Roosevelt, available ONLY in official U.S. government sets!