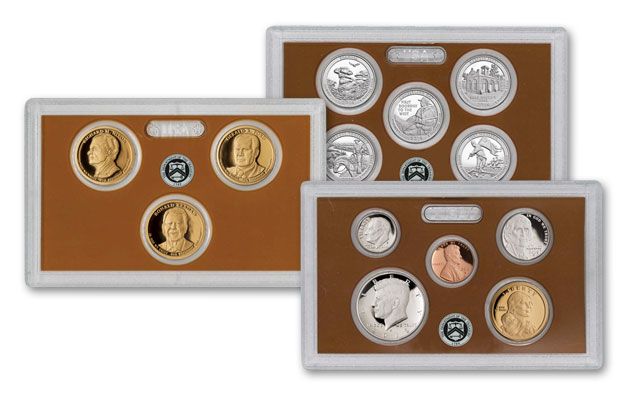 Availability: In Stock
This item will ship within 2 business days.
Item #
285230
Review this product
Add to Wish List Add to Wish List Wishlist is for registered customers. Please login or create an account to continue. Add to Compare
Product Description

The ultimate standard in coins is the proof—a gleaming coin with details so sharp and luster so dazzling that one instantly recognizes it as the pinnacle of minting perfection. Proof coins are exceptional. The mint prepares special, highly polished planchets, engraves detailed dies and strikes each coin two or more times to bring out all the exquisite design details and the coin's frosted and mirrored surfaces. The coins are then inspected individually, with mint employees rejecting any coins with flaws. After packaging to protect the coins, the coins leave the mint and into the hands of collectors. Proof Sets are the only way to get yearly coins in each denomination with unparalleled craftsmanship.

Each year, Americans scramble to get their share of the limited edition Proof Sets. Now we’re making the 2016 sets available to you!

i.      Shawnee National Forest in Illinois

i.      Richard M. Nixon: This coin honors the 37th President of the United States, Richard M. Nixon, with a portrait of him on the obverse. The reverse of all of the Presidential $1 Coins contains an image of the Statue of Liberty, as designed by Don Everhart.

ii.      Gerald Ford: Gerald Ford, the 38th President of the United States, will be featured on the obverse of this coin. It will be joined on the reverse by Everhart’s Statue of Liberty design.

iii.      Ronald Reagan: Ronald Reagan coin honors the 40th President with a portrait of him on the obverse. The reverse will contain the standard Statue of Liberty design by Don Everhart.