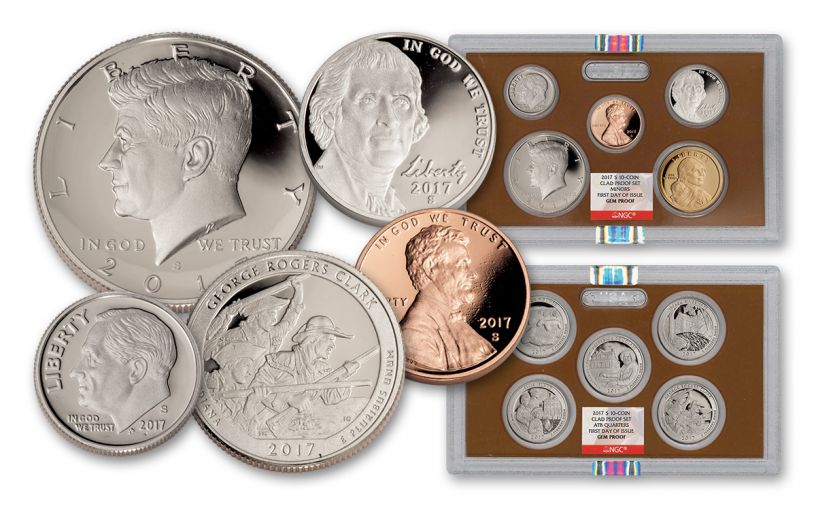 Availability: In Stock
This item will ship within 2 business days.
Item #
304215
Add to Wish List Add to Wish List Wishlist is for registered customers. Please login or create an account to continue. Add to Compare

The United States Mint's Finest of 2017, All in One Spectacular Set!

An American Tradition Since 1936!

Ever since the term "proof" was first coined (ha!), expert artisans at mints around the world have produced these numismatic marvels to exhibit the best of what their hands and machinery can accomplish. For more than 80 years, save for pauses in the 1940s and 1960s, the United States Mint has released annual proof sets that showcase the year's coin lineup with the added benefit of carefully selected planchets, polished dies and multiple mint strikes. The result is a gorgeous collection produced not to be spent, but to be admired. 2017 heralds the arrival of another excellent proof set, with the latest roundup of one-year-only designs!

Of course, your 2017 U.S. Mint Proof Set will include luminous versions of the standard Lincoln Cent, Jefferson Nickel, Roosevelt Dime and Kennedy Half-Dollar. Also included in that first acrylic lens is 2017's Native American Dollar featuring Sequoyah, the creator of the monumental Cherokee Syllabary that established new avenues for intertribal communication in the early 1800s.The second acrylic lens in your 2017 Proof Set features all five of the year's America the Beautiful Quarters, including:

All ten coins in this 2017 U.S. Proof Set feature the "S" mintmark, signifying their production at the acclaimed San Francisco Mint. In addition, this proof set is graded Gem Proof and certified First Day of Issue by Numismatic Guaranty Corporation (NGC). That means each acrylic lens in the set will feature tamper-proof seals applied by NGC, as well as special labels declaring your set's characteristics! Your proof set will also arrive to you in its original official mint packaging along with a U.S. Mint certificate of authenticity. United States Proof Sets are an annual tradition for many collectors. Whether you're continuing your collection or looking to start one up, now is the time to secure yours while you can! Don't wait -- get one (or a few) in your cart today!