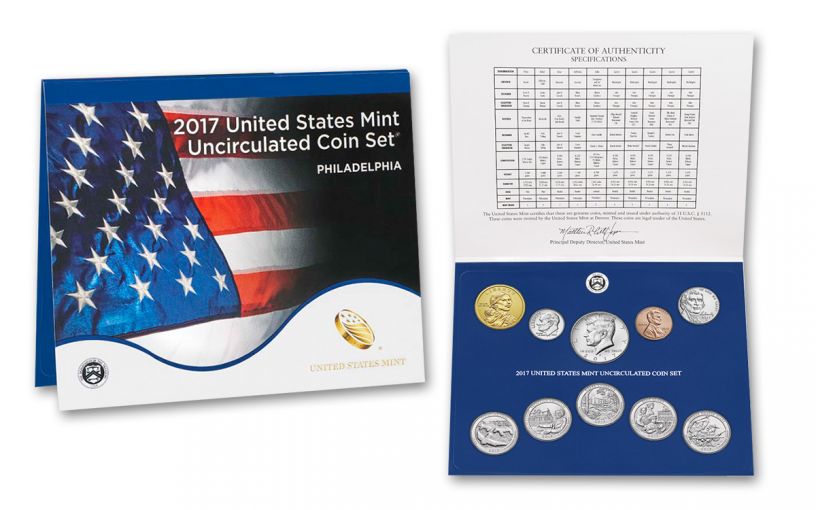 Availability: Out of Stock
This item is currently Out of Stock. Please sign up to be notified if this product becomes available.
Item #
309399
Add to Wish List Add to Wish List Wishlist is for registered customers. Please login or create an account to continue. Add to Compare

Since 1947 (save for the occasional hiccup), the annual uncirculated set from the United States Mint has gathered all of the year's standards into a single irresistible collection. From the cardboard holders of the '40s and '50s to the plastic envelopes of the '60s, '70s and '80s to the graphically rich presentation folders of today, you can trace the stunning evolution of mint design and technology. Now, as part of the United States Mint's 225th Anniversary celebration, the 2017 uncirculated set is ready to continue the tradition!

One-Year-Only Coins No Collection Should Be Without!

This 2017 U.S. Mint Set features all 10 of the year's circulating coins in pristine uncirculated versions from both the Denver and Philadelphia Mints -- that's 20 coins in all! But that's only the beginning. Check out the details:

-       You'll receive the first-ever, Philadelphia Lincoln Cent with a "P" mintmark -- something that has never been done before in the past 225 years of the mint, and won't be done again after 2017!

-       Your set will also contain 2017's five America the Beautiful Quarters from both mints, including:

-       You'll also find 2017's Native American Dollar featuring Sequoyah, the creator of the monumental Cherokee Syllabary that established new avenues for intertribal communication in the early 1800s -- one each from Denver and Philadelphia

-       Finally, you'll receive the standard Jefferson Nickel, Roosevelt Dime and Kennedy Half Dollar from both mints, as well as the Lincoln Cent from the Denver Mint

All of the above is collected and presented in two stunning U.S. Mint folders that both contain a full slate of statistics as well as a certificate of authenticity. Now is the perfect time to continue your collection or start a brand new adventure on the right foot. Don't wait another moment -- and it to your cart now!