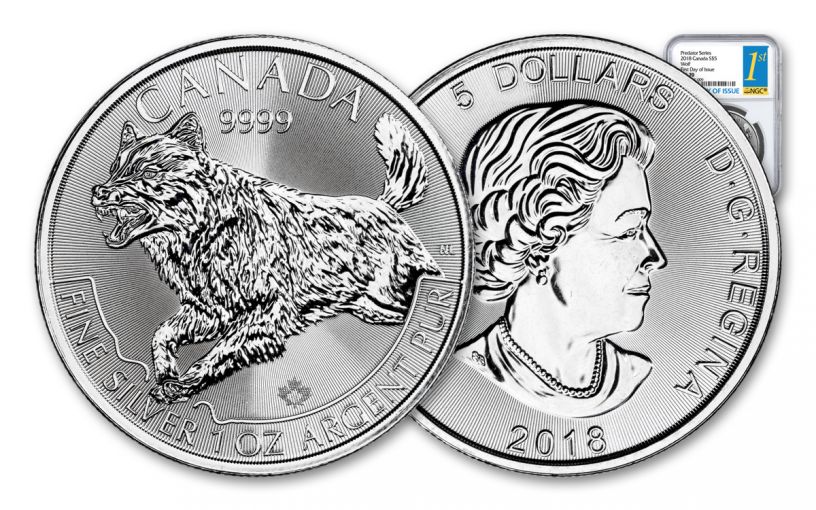 Availability: Out of Stock
This item is currently Out of Stock. Please sign up to be notified if this product becomes available.
Item #
334642
Add to Wish List Add to Wish List Wishlist is for registered customers. Please login or create an account to continue. Add to Compare

Canada’s New Silver Wolf Is Ready to Leap into Your Collection!

The Royal Canadian Mint is known throughout the world for its absolute mastery in capturing the essence of exotic wildlife. So when Canada kicked off a new silver bullion coin series in 2016 it was no surprise that it featured some of the country’s wildest animals – predators captured in pure silver!

Joining the cougar (2016) and the lynx (2017), this year’s silver wolf is a worthy addition. The design features a snarling wolf that at first glance appears to be leaping off the coin’s surface. This isn’t any fairy tale wolf trying to blow down a porcine house or waylay little girls wearing red riding hoods – this is a highly detailed design of a ravenous wolf with his fangs exposed moving in for the kill. The image is so detailed you can see every hair of the wolf’s thick fur.

This large silver dollar-sized coin is struck in 99.99% silver, making it appealing not just to wildlife enthusiasts but to silver stackers as well. It’s also been graded by the Numismatic Guaranty Corporation (NGC) to be in perfect Mint State-70 (MS70) Condition. NGC also certified the coins in this offer to be First Day of Issue (FDI) coins meaning they are among the coins struck on the first day the series was issued.

But here’s the little secret about this year’s coin: The Royal Canadian Mint struck 40% fewer of these coins then they had the previous two years. That means everyone who had been collecting the series may not be able to get one of this year’s coins!

Don’t wait to add this silver wolf to your pack. A smaller mintage than previous series coins means there’s fewer to go around. Add one – or several – to your cart today!