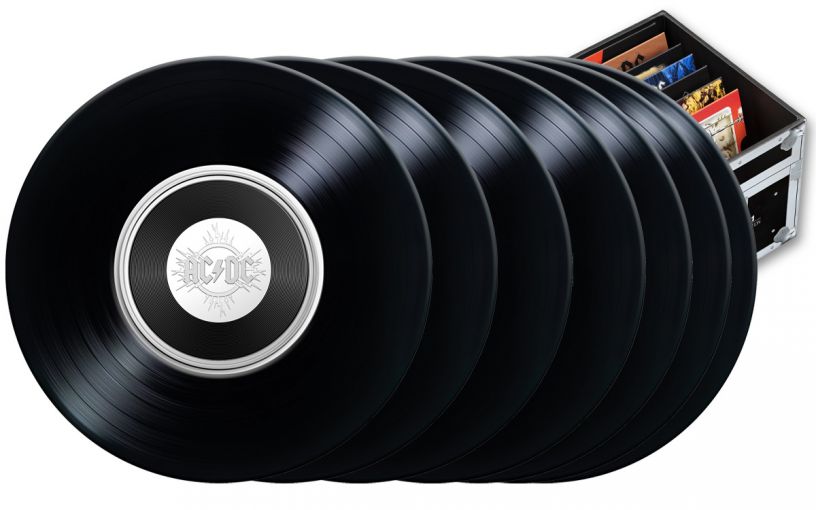 Availability: In Stock
This item will ship within 2 business days.
Item #
367660
Add to Wish List Add to Wish List Wishlist is for registered customers. Please login or create an account to continue. Add to Compare

It’s hard to believe that AC/DC, one of the world’s greatest rock bands, has been churning out records for 45 years. It’s true, and now The Royal Australian Mint is honoring the best-selling group with an epic collection that features tributes to six of AC/DC’s album anniversaries and a seventh coin that features the band’s logo!

Released just in time to coincide with the November 2020 release of Power Up, the band’s 17 and latest studio album, these coins celebrate the Australian band’s musical legacy, consisting of several notable album anniversary coins and a brand new AC/DC coin dedicated to the group. Each of the album coins were struck as 11.3-gram copper-nickel 20-cent pieces. They represent the 25th anniversary of Ballbreaker, the 40th anniversaries of Back in Black and For Those About to Rock and the 45th anniversaries of Dirty Deeds Done Dirt Cheap, High Voltage and T.N.T!

The seven album-art pieces each come with a colorized Uncirculated finish. The black coloring gives each coin the look and feel of a vinyl record album with the artwork from the album cover blazing in the center in stark contrast. Then, each coin slips into a miniature record sleeve the replicates the original Australian version of the album sleeves. All seven coins then come beautifully displayed in a record box storage box the looks like the kind of shipping cases the band would use to transport their equipment while on tour. You’ll feel like the world’s luckiest roadie when you get this collection home. But you’ll have to act fast… just 30,000 of these rockin’ collections have been released for the entire world.

The perfect gift for any fan of AC/DC or for anyone who would like to add a set of incredibly unique coins to their collection, The Royal Australian Mint’s AC/DC Seven-Coin Collection is just what the doctor ordered!

Pay tribute to one of the world’s greatest rock bands with The Royal Australian Mint’s AC/DC Seven-Coin Collection. Order yours now!