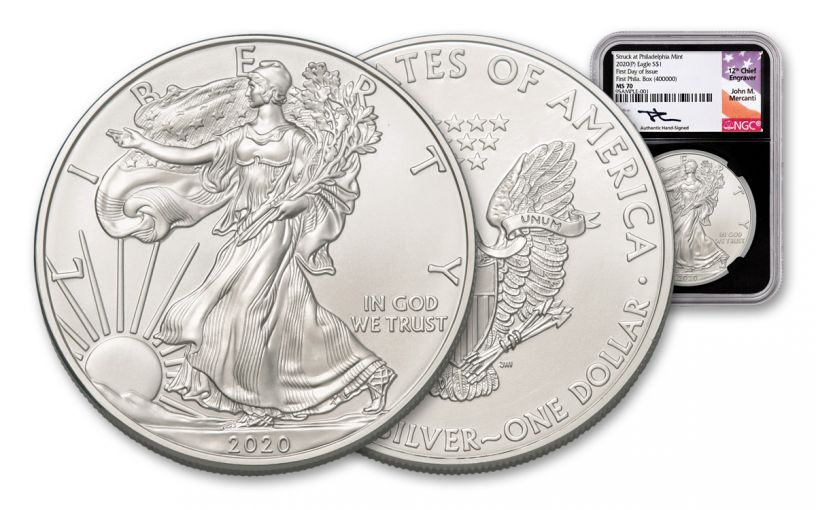 Availability: Call-In Only
This item is only available on a Call-In basis. Please call 1-800-510-6468 to speak to a representative.
Item #
363418
Add to Wish List Add to Wish List Wishlist is for registered customers. Please login or create an account to continue. Add to Compare

Due to the COVID-19 pandemic, the United States Mint facility at West Point was forced to temporarily halt production. The news of the West Point Mint’s closure in 2020 from April 8-20 was met with concern across the coin collecting community and by silver stackers around the world because supplies of silver coins were already dwindling. And, since the West Point Mint is the U.S. Branch Mint that typically strikes American Silver Eagle bullion coins, folks were justifiably worried.

That’s because each Silver Eagle available in this offer comes fresh from box #400,000 — the very first 500-coin monster box of 2020 Silver Eagles to leave the Philadelphia Mint!

What’s more, each coin here has been graded by the Numismatic Guaranty Corporation (NGC) as being in near-perfect Uncirculated Mint State-69 (MS69) condition, a distinction that means these almost-flawless coins showcase impressive full strike and indistinguishable imperfections — well above and beyond the quality of the vast majority of coins in the series. In addition, NGC has also certified that these Silver Eagles are First Day of Issue (FDI) coins, meaning they were received by NGC or an NGC-approved depository by the release date or on the business day within 24 hours of the official release date.

And here’s the kicker: Not only will these coins come sonically sealed in acrylic holders with a black display cores, each will also be encapsulated with an exclusive certification label personally signed by John Mercanti, former Chief Engraver of the U.S. Mint and designer of the iconic Silver Eagle reverse, which is set to be redesigned in 2021. The U.S. Mint’s 12th Chief Engraver, Mercanti is a giant in the numismatic world, having produced more coin and medal designs than any person in U.S. Mint history!