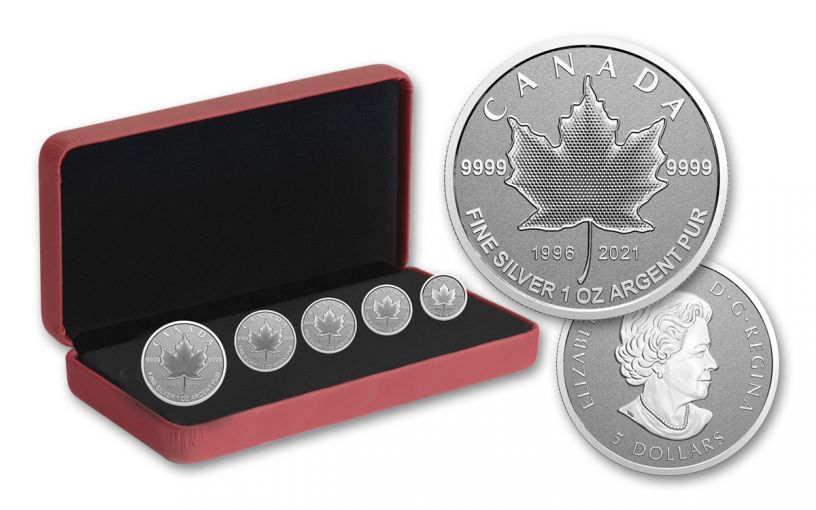 Availability: Out of Stock
This item is currently Out of Stock. Please sign up to be notified if this product becomes available.
Item #
407086
Add to Wish List Add to Wish List Wishlist is for registered customers. Please login or create an account to continue. Add to Compare

In 2020, The Royal Canadian Mint struck a coin that combined beauty and technical sophistication into a release that instantly became a worthy addition to its fan-favorite series of Maple Leaf coins. The coin was the instantly popular Silver Pulsating Maple Leaf coin, and it quickly sold out. Now for 2021, the Mint isn’t just releasing a new year of the unique coin, but a five-coin set of Reverse Proof coins!

A Dazzling Combination of Numismatic Artistry and Photonic Science

This is the first time that The Royal Canadian Mint has struck a set of coins that combines both the Mint’s classic reverse proof finish with its brand new pulsating technology:

If the Maple Leaf here seems familiar, it should: That’s because it is the iconic Sugar Maple design created in 1979 by Walter Ott Sugar. Turn the coin one way and it will appear as if a gentle breeze is shaking the leaf. Turn it another way and a different rippling effect appears. I addition to the familiar Maple Leaf, the coin also features the dual dates of 1996 and 2021 to commemorate the 25th year of the maple tree being Canada’s official national arboreal emblem.

The five pieces in this set include the $5 one-ounce coin, the $4 half-ounce coin, the $3 quarter-ounce coin, the $2 tenth-ounce coin, and the $1 twentieth-ounce coin. Each was struck in highly pure 99.99% silver — a total of 1.9 ounces or nearly two ounces of fine silver! The entire set will come beautifully housed in a maroon-colored clamshell display box and accompanied by a mint-issued Certificate of Authenticity.

Just 3,000 of these magnificent sets have been issued for worldwide releases — and they’ve already been announced as being completely sold out at the mint! That means you must not wait, because these Maple Leafs are sure to blow out of here in short order. Don’t delay; reserve your 2021 Canada Silver Pulsating Maple Leaf Reverse Proof 5-Coin Set now!

Sold out at the mint, this is your chance to get the 2021 Canada Silver Pulsating Maple Leaf Reverse Proof Five-Coin Set. Don’t delay, order yours now!