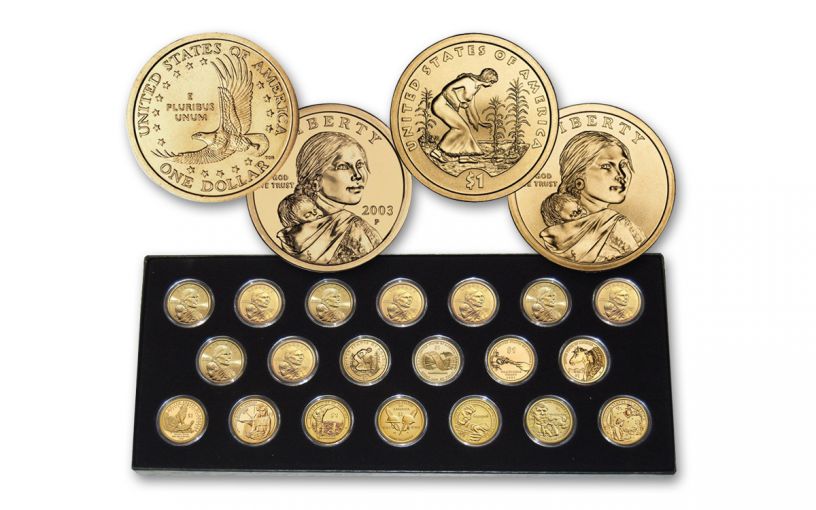 Availability: In Stock
This item will ship within 2 business days.
Item #
359247
Add to Wish List Add to Wish List Wishlist is for registered customers. Please login or create an account to continue. Add to Compare

Though circulating “Indian” coins have been struck by the U.S. Mint for more than a century, most were interpretations of Lady Liberty wearing a feathered headdress. The Sacagawea Dollar, first struck in 2000, was the first time that the U.S. Mint struck a coin for circulation featuring a Native American woman. A strikingly beautiful coin, it honors Sacagawea, the Shoshone woman who accompanied Lewis and Clark on their expedition to the Pacific Ocean. The coin was brilliantly designed by Glenna Goodacre, who used Randy’L He-dow Teton – herself a member of the Shoshone tribe – as her model.

To observe the 20th anniversary of this series in 2020, we compiled a complete year-date collection that brings together all 20 dates of the Sacagawea Dollar from 2000 to 2019. In it is the very first coin issued in 2000 and the run from 2009 to 2019 that features 12 one-year-only reverse designs.

From 2000 to 2008, the reverse remained constant, but from 2009 on the U.S. Mint has used the opportunity to release these inspiring designs showing various Native American themes. They include:

2009 depicts a Native American woman planting seeds in a field populated with corn, beans and squash – the so-called “Three Sisters of Agriculture” central to Native Americans.

2010 shows the Hiawatha belt surrounding five stone-tipped arrows. The subject of the design is the “Great Tree of Peace.”

2012 commemorates the trade Routes of the 17th Century and depicts the profile of a Native American and a horse in the foreground and a group of galloping horses in the background.

2013 pays tribute to the Treaty with the Lenape in 1778, the first formal treaty between the United States and a Native American tribe. The coin depicts a turkey, a howling wolf, and a turtle – all symbols of the Lenape.

2014 shows a Native American extending a ceremonial pipe while his wife holds a plate of food, including fish, corn, roots and gourds. In the background is a compass, displaying “NW” for “northwest.”

2016 commemorates Native American Code talkers from World Wars I and II. It shows the Brodie helmet of WWI and the M1 helmet of WWII along with two feathers which combine to forming a symbolic “V for victory” sign.

2017 features a portrait of Sequoyah, a Cherokee scholar who in 1821 created an alphabet that, once adopted by his people, allowed them to surpass the literacy rate of their European-American neighbors.

2018 honors legendary athlete Jim Thorpe. A child of Sac and Fox and Potawatomi Indian bloodlines Thorpe is one of America’s greatest athletes, winning gold medals in both the pentathlon and the decathlon at the 1912 Olympics

Each coin in this comprehensive collection comes in original Brilliant Uncirculated (BU) condition as fresh and crisp as the day they left the mint. In addition, the entire collection will come beautifully housed in a custom presentation case and accompanied by a certificate of Authenticity.