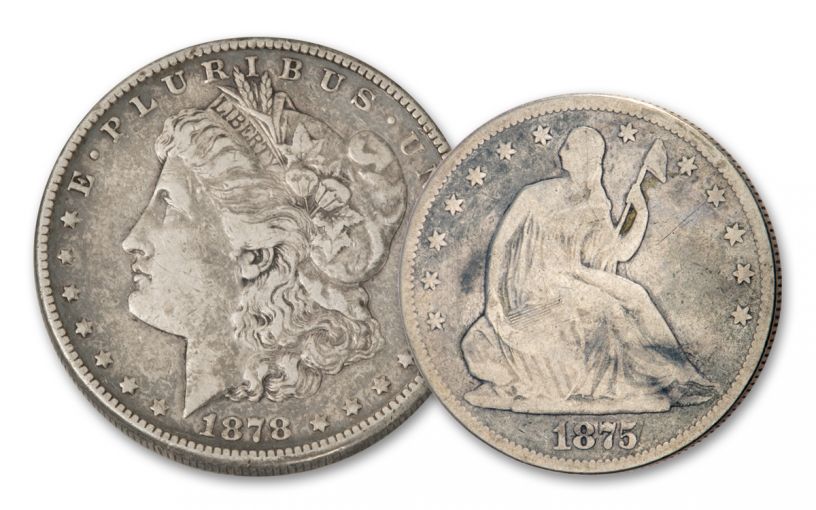 Availability: In Stock
This item will ship within 2 business days.
Item #
362755
Add to Wish List Add to Wish List Wishlist is for registered customers. Please login or create an account to continue. Add to Compare

Prior to 1878, the Seated Liberty Half Dollar was the largest silver coin ever issued for circulation by the United States Mint. But then came the Morgan Silver Dollar — perhaps the most widely collected vintage U.S. silver coin of all time. And, according to a consensus of coin experts, the most beautiful examples of these cons were those struck at the San Francisco Mint. Now you can get examples of BOTH coins in this special two-piece set that includes a first-year 1878-S Morgan Silver Dollar!

While these coins spent their days rattling in the dusty saddlebags of American pioneers during the Old West, they got their start thanks to the discovery of the Comstock Lode near Virginia City, Nevada. One of the world’s largest silver strikes, the Comstock Lode was a find so large that it not only touched off a mining bonanza, but also sparked an investment craze in San Francisco that saw all kinds of speculators, bankers and everyday investors joining the rush.

San Francisco was home to barely 1,000 people until California Gold Rush in 1849 swelled its ranks past 25,000 by the end of the year. By 1860, the population stood at around 57,000. The silver rush proved to be another magnet and by 1870 the city’s population stood at 150,000. By 1880 it had climbed to 233,000. During this time, Francisco gained a reputation as a gambler’s town and fortunes were literally made overnight. The city buzzed with tales of chambermaids buying the hotels they had formerly worked at, and common laborers riding in opulent carriages through the city’s fashionable neighborhoods after being employed as ditchdiggers just a few weeks earlier.

This set brings together a Seated Liberty Half Dollar struck between 1875 and 1877 and a first-year 1878 Morgan Silver Dollar struck at the famous Granite Lady — the famous second San Francisco Mint building that got its name for its massive two-story structure built out of granite to handle the heavy minting equipment. Completed in 1874, the Granite Lady was so sturdy that it was the only financial institution left standing and still in operation following the 1906 San Francisco earthquake.

Each coin was struck in highly pure 90% silver and comes in Very Good to Very Fine (VG–VF) condition. Each set will also come housed in a deluxe presentation case. Seated Liberty dates will vary. Don’t miss your chance to own the two largest circulating silver coins of the 19th century struck in San Francisco during the heyday of the silver rush. Secure yours today!