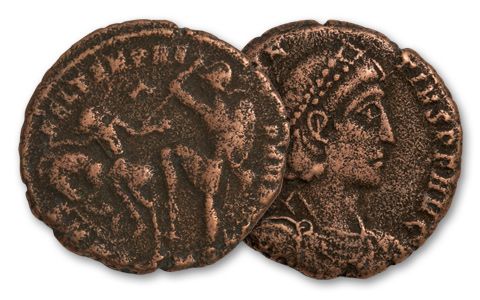 Found: Gladiators Come to Life on Genuine Bronze from the Constantine Dynasty

It was hard to believe. Our buyer had found a small number of original Roman coins featuring gladiatorial combat. These are authentic, original Roman bronze coins, carried in the pockets of emperors, gladiators, and Roman citizens over 1,600 years ago. It's amazing! These bronze coins survived the rise and fall of empires, earthquakes, floods and world wars. Struck between 348 and 356 A.D., the obverses features the Roman Emperor Constantius II. He was the son of famous Emperor Constantine the Great. In addition to the gladiator combat on the reverse is the legend "Happy Days Are Here Again." So that's where that came from!

NOTE: This Roman Bronze is the 'big sister' to the nationally-advertised "Gladiator's Paycheck" coin. At 20-25mm diameter, this $49.95 coin is slightly larger and heavier than the 17-20mm version which sells for $39.95.

It's not often you can even hold such an ancient treasure in your hand, let alone own one. But here's the real news: thanks to the small hoard we recently secured, you can now own this 1,600-year-old coin, for under $50! But hurry, the battle to get to one is now underway!