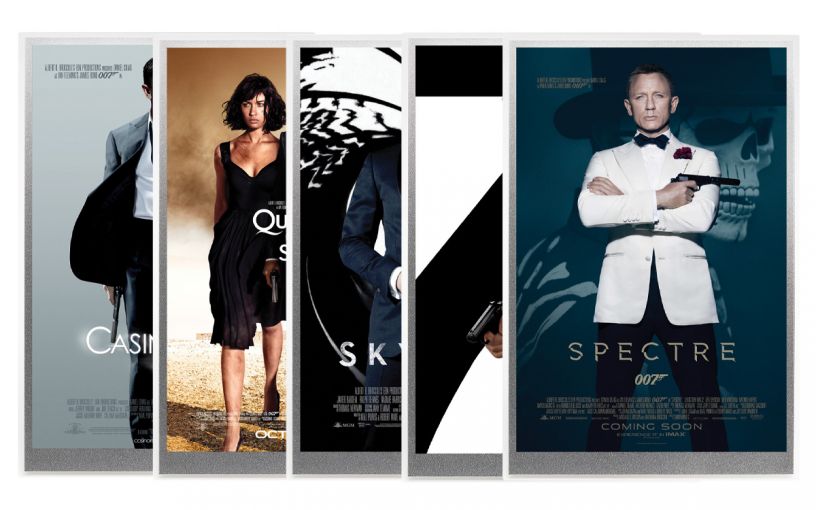 Availability: Out of Stock
This item is currently Out of Stock. Please sign up to be notified if this product becomes available.
Item #
367610
Add to Wish List Add to Wish List Wishlist is for registered customers. Please login or create an account to continue. Add to Compare
Recommended Products
Product Description

Go to the Movies With Your Favorite Secret Agent

By the early 2000s, the James Bond films had seemingly exhausted all the plot devices and villains that could have possibly been thought of. But then along came actor Daniel Craig to step into 007’s tuxedo and breathe new life into one of the world most popular film franchises. His first outing in 2006’s Casino Royale disposed of the silliness and gadgetry that had plagued the prior films, and saw Craig deliver a caustic, haunted and intense interpretation of the British super spy.

Unfortunately for fans of James Bond and Daniel Craig, the global COVID pandemic delayed the release of No Time to Die, the 25th instalment in the James Bond film series produced by Eon Productions. Originally slated for an April 2020 release, the film has been pushed back until 2021, depriving fans of Craig’s fifth — and final — appearance in the role of the fictional British MI6 agent. Now you can acquire the next best thing: a five-piece set of silver foils featuring fully colorized images of the original movie posters for each Daniel Craig Bond film!

Struck by Australia’s prestigious Perth Mint in 5 grams of highly pure 99.9% fine silver, each foil features a different movie poster of the last five James Bond films: Casino Royale (2006), Quantum Of Solace (2008), Skyfall (2012), Spectre (2015) and No Time To Die (2021). These officially licensed silver foils include the famous 007 gun logo, and the vivid colorization effectively sets the scene and whet one’s appetite for more Bond action. The cars, the women, the chases, the megalomaniacal villains — Bond has it all!

Measuring nearly six inches by four inches, these silver foils are suitable for display anywhere in your home or office. Plus, each will come encased in a PERSPEX® acrylic glass frame and have its own display box as well as a black base for upright display. The entire set will come housed inside a prestigious black box within a branded sleeve. Just 1,000 of each silver foil has been struck, meaning that if you want to acquire these awesome collectibles, you’d better do it now while you still can!