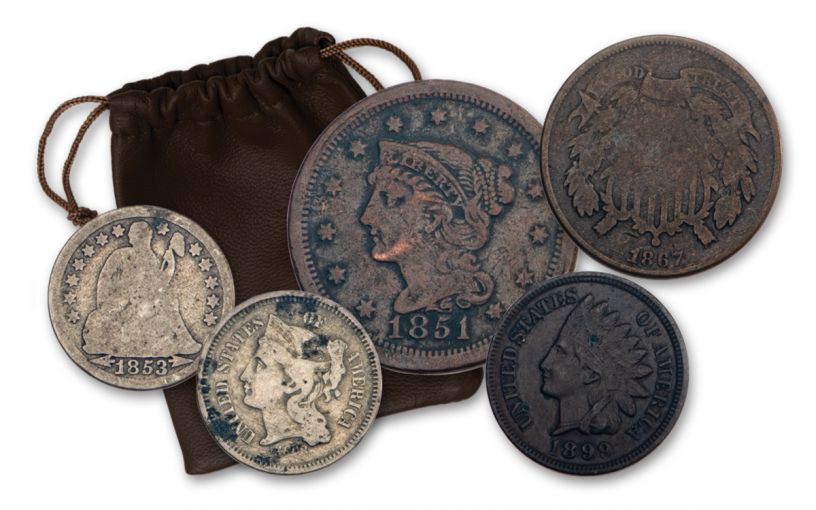 Availability: In Stock
This item will ship within 2 business days.
Item #
355056
Add to Wish List Add to Wish List Wishlist is for registered customers. Please login or create an account to continue. Add to Compare

Inside a cowboy’s saddlebag was pretty much everything he owned, which usually included an extra set of clothes, ammunition, playing cards, a few precious letters and maybe even a harmonica. It was also where he kept his money, REAL money… money that jingled as he and his horse bounced along the trail, not folding money. To them, paper money wasn’t worth a hill of beans – not by a jugful. That’s because it would more than likely get wet and tear before it could be used in town at the saloons, gambling houses and general store.

It’s with these men in mind that we’ve assembled the Wild West Saddlebag Collection, bringing together five coins struck more than 125 years ago. You’ll receive a Large Cent, an Indian Head Cent, a Two Cent piece, a Three Cent Nickel and a Seated Liberty Dime. Each coin comes in Good (G) condition meaning they actually circulated during the 1800s. Who knows where these coins were used and in whose saddlebags they rode? Let your imagination run wild!

These were the coins that circulated heavily during that era and were the backbone of day-to-day commerce in the Old West. And yet today, many collectors don’t even know that all of them existed – especially since the Two Cent piece and Three Cent Nickel were relatively short-lived coins. Each collection will arrive in a leather pouch along with a storybook on the legendary outlaws of the Wild West.

We’ll give it to you straight, pardner: You’d better grab one of these sets soon because they’re liable to last about as long as a pint of whisky in a five-handed poker game! Saddle up for a trip back in time and click one of these Wild West Saddlebag Collections to your cart today!